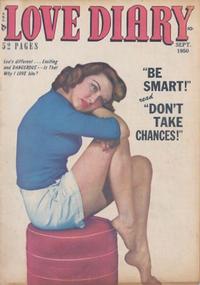 Genre
romance
Characters
Bill Rand; Virginia; Don Richards; Violet Kane
Synopsis
Virginia is a circus rider whose mother raised her to be suspicious of men, since Virginia’s father ran off when she was a baby. Trapeze artist Don and circus owner Bill are both attracted to Virginia. Don offers to marry her, which makes his partner Violet so insanely jealous that she tries to kill him during their act. Bill fires Don and Violet; Virginia says she doesn’t love Don, but Bill might win her affections if he tries.
Keywords
Circus

Genre
romance
Characters
Mary Loring; Lou Magrone; Jim Felsun; Mr. Loring; Mrs. Loring
Synopsis
Mary asks her boyfriend Jim to take her to the dodgy Tropical Gardens nightclub. Swept off her feet there by Lou, she dumps Jim. Lou is a gangster and Mary is forced to testify about their affair when he’s arrested for murder. He’s sent to prison and her reputation is ruined. Mary leaves town to begin a new life.

Not Good Enough For Me (Table of Contents: 4)

Genre
romance
Characters
Anne Ralston; Johnny Allen; Greg Martin
Synopsis
Anne moves from Kansas to Washington DC in search of excitement. Instead, she gets a boring office job and dates fellow Kansan Jimmy, who only wants to go home and open a gas station. Anne meets Greg and accepts his invitation to New York; he says she can stay with his sister. When she gets there, however, there is no sister. Anne slaps Greg and returns to Washington. She tells Johnny she’ll go with him if he wants to return to Kansas and run a gas station.

First Line of Dialogue or Text
I want to believe you, Vi!
Genre
romance
Characters
Violet Marsh; Johnny Dennis; Roger Gardner; Ray Mann
Synopsis
Secretary Violet meets Johnny, an artist who lives in the same Greenwich Village apartment building as she. They fall in love but he is too poor to marry her. She offers to get him a job with her company but he refuses and says they need to stay apart until he’s a success. Violet, on the rebound, agrees to marry executive Roger, then learns Johnny has won a prestigious award. Violet wants to reconcile with Johnny but he is suspicious and demands proof she loves him. Violet comes to Ray Mann for help and he asks the readers of Love Diary comics to write in with their suggestions.

"Ray Mann" in this issue is drawn completely different than either of his previous incarnations in "Love Diary." This time he has black hair and a mustache.

My Trusting Heart (Table of Contents: 6)

Genre
romance
Characters
Kathy Duncan; Tom Lassiter; Helen Judson; Jimmy; Eddie
Synopsis
Kindhearted waitress Kathy is engaged to bus driver Tom. Kathy befriends the homeless Helen, allowing her to move in with her and getting her a waitress job in the diner where she works. Helen flirts with Tom and provokes a fight between Tom and his friend Jimmy. Kathy leaves town, first asking Helen to safeguard the bus payroll, which is kept in the diner for the drivers to pick up. Kathy is arrested for stealing the money, but Tom proves Helen is the thief. Tom and Helen get married.