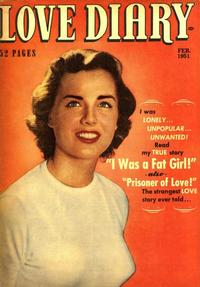 Prisoner of Love! (Table of Contents: 1)

Genre
romance
Characters
Ruth Andrews; Derek Masters; Aunt Mary; Bob Simmons
Synopsis
Orphan Ruth lives her with miserly Aunt Mary. Ruth spends her own money on piano lessons with Derek and is devastated when her aunt says this must stop. Derek agrees to teach her at no charge but becomes enraged when Ruth dates music store clerk Bob, and stops her lessons. Ruth tries to forget her music but her life seems empty; she realizes she loves Derek and playing the piano, and returns to his side.

Genre
romance
Characters
Nancy; Pat; Johnny Marshall; Clyde Morgan; Nancy's mother
Synopsis
Plump office clerk Nancy loses her boyfriend Johnny to her slim sister Pat. Nancy goes on a diet to attract co-worker Clyde, but fears Pat will steal him as well. However, Clyde proves he loves Nancy and Pat vows to help her sister get down to a “normal weight” for her wedding.
Reprints

First Line of Dialogue or Text
Once again, Ray Mann, Love Diary's counselor, receives an anguished girl who has come to him desperately seeking help...
Genre
romance
Characters
Ray Mann; Rhonda R., Tom G.; Celia
Synopsis
Rhonda meets Tom on vacation and they fall in love. However, she discovers Tom is engaged to her best friend Celia. Rhonda asks Ray Mann if she should warn Celia that Tom is a “trifler” or keep her mouth shut. Ray suggests Love Diary readers write in with their opinions.

Ray Mann is off-model again in this story, with brown hair and more angular facial features than the standard image.

Not Meant for Love (Table of Contents: 4)

Genre
romance
Characters
Mike Lowry; Irene Grey; Mr. Grey; Mrs. Grey; Mrs. Warner; Jimmy Warner
Synopsis
Irene’s parents think her health is delicate, so they are reluctant to move to a mining town in Alaska, where Mr. Grey has a new job. Irene insists, and they settle in, helped by handsome Mike. Mike and Irene fall in love, but her frailty limits her activity. Mike says it’s because she’s pampered, not ill, and Irene realizes he is correct. She proves she’s fit and can live a normal life, and she and Mike reconcile.
Keywords
Alaska

Art credits from the French fan magazine Back Up #14, as submitted by Stephane Petit, via the GCD Errors list, February 2009. Additional info from the John Buscema checklist built by Jim Vadeboncoeur Jr and Michel Maillot.

The Man of My Dreams (Table of Contents: 6)

Genre
romance
Characters
Phyllis Prentice; Ted; Fredric Parker; Dean Wilson; Tommy Prentice; Mrs. Prentice; Mr. Prentice; Marge; Jimmy Morrison; Al
Synopsis
High school student Phyllis meets actor Fredric Parker and decides he is her model for the perfect man. Even when she goes to college, she turns down dates, preferring to dream about finding her perfect mate. After Fredric Parker is involved in a scandal, Phyllis realizes there is no perfect man. She reluctantly dates football player Jimmy. Jimmy’s behavior during an emergency makes her realize that he’s brave and sweet and she discovers he is the man of her dreams.
Reprints