I was a Pick-Up! (Table of Contents) 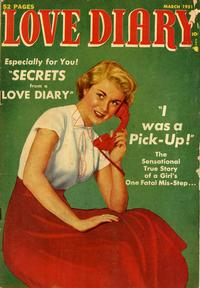 Genre
romance
Characters
Lila Cowan; Karen Cowan; Bert Robbins; Salvatore; Harry Saunders
Synopsis
While her boyfriend Bert is frequently out of town on business, Lila innocently allows herself to be picked up by strange men for dates. After one bad experience she has to walk home in a rainstorm, only to discover Bert waiting for her. He breaks off their relationship. Lila vows to rid herself of her bad reputation and be worthy of a decent man someday.

Unworthy of his Love (Table of Contents: 2)

In the splash panel, Lila's suitor is referred to as "Howard" by his parents, but in the story his name is George.

First Line of Dialogue or Text
Once again, Ray Mann, Love Diary’s Human Relations Advisor, invites you to sit in on a case...
Genre
romance
Characters
Ray Mann; Alice Chalmers; Tommy Jennings; Jeannie; Bob; Neil Shore
Synopsis
Alice’s boyfriend Tommy is drafted and she tries to remain faithful but eventually dates Neil. Tommy returns on leave and urges Alice to marry him right away. Alice can’t decide: should she marry Tommy and be separated for long periods, or marry Neil and have a husband by her side. Ray Mann asks Love Diary readers to help her choose.

Too Young to Marry (Table of Contents: 4)

Genre
romance
Characters
Jim Pearson; Patty; Mrs. Stewart
Synopsis
18-year-old Patty decides to marry Jim, against her parents’ advice. She has to keep her factory job to help pay the bills, and soon finds keeping house and working a full-time job is difficult and tiring. Jim and Patty squabble over money; he takes a night course so he can get a raise. Patty, left alone more than ever, decides to leave Jim. Patty's mature co-worker Mrs. Stewart says a successful marriage requires time and dedication: Patty has to think of herself as part of a couple, not a selfish individual. Patty and Jim reconcile.
Reprints

For Better or for Worse (Table of Contents: 5)

No Place for Love! (Table of Contents: 6)

Genre
romance
Characters
Carol; Nancy; Bob Rodgers; Marie
Synopsis
Secretary Carol despises sloppiness and disorder, while her sister Nancy prefers to take life as it comes. Carol becomes irritated when her boyfriend Bob deviates from their usual routines. Bob calls her a “hopeless neurotic” and breaks up with her. With Nancy’s help, Carol conquers her compulsive desire for neatness and order, and finds herself enjoying life more. Bob returns and they make up.
Reprints