I Loved a No-Good Guy! (Table of Contents) 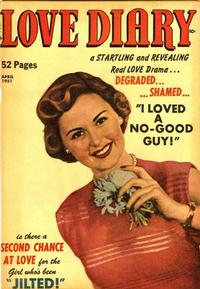 I Loved a No-Good Guy (Table of Contents: 1)

Genre
romance
Characters
Janice Payne; Eddie Blaine; Tom Mitchell; Mrs. Payne; Mr. Payne; doctor
Synopsis
Singer Janice is swept off her feet by Tom. They fall in love but she is often humiliated by his irresponsible nature. When Tom contracts pneumonia he promises to mend his ways but returns to his old self when healthy, even slapping Janice in public, but she can’t break away. Bandleader Eddie urges Janice to go on tour and she eventually finds herself cured of her sick love for Tom. Eddie and Janice fall in love.

Genre
romance
Characters
Sharon Raleigh; Rudy Milford; Johnny Leeds; Mitzi; Mrs. Raleigh
Synopsis
Sharon is engaged to Johnny but he leaves on a business trip and sends a telegram breaking up with her. Sharon is humiliated and refuses to date anyone else, until tennis player Rudy comes along and they fall in love. Sharon is afraid he’ll ditch her as well, so she demands that he marry her at once. This would require giving up his amateur status and turning pro: Rudy asks Sharon to wait until after the championship match, but she refuses. They break up. Rudy is losing the big match until Sharon shows up and shouts that she loves him. Rudy wins and he and Sharon will wed.
Keywords
tennis

Art credits from the French fan magazine Back Up #14, as submitted by Stephane Petit, via the GCD Errors list, February 2009. Additional info from the John Buscema checklist built by Jim Vadeboncoeur Jr and Michel Maillot.

First Line of Dialogue or Text
Everyday, the troubled and confused come to Ray Mann for aid.
Genre
romance
Characters
Ray Mann; Helen S.; Johnny
Synopsis
Johnny and Helen are engaged, but they’re too poor to get married right away. Just when Helen thinks they’ve saved enough money, Johnny says he wants to spend it on a business opportunity--a gas station--which in the long run will be more secure for them. Helen refuses to part with her share of their savings and Johnny breaks up with her. Helen asks Ray Mann if she should give Johnny the money for his business or press him to get married right way. Ray says “I think the readers of Love Diary can solve your problem!”

Genre
romance
Characters
Edna Terriss; Greg Folsom; Virginia; Bob; Jean; Virginia's mother; Virginia's father
Synopsis
After her father’s death, Edna comes to live with her aunt and uncle, Virginia’s parents. Virginia tries to include Edna in her social circle, but her friends don’t trust the newcomer, suspecting she's a man-stealer. Indeed, Virginia catches Edna trying to steal her boyfriend Greg. Her mother advises her to fight for her man, and Virginia does so. Greg confirms his love for Virginia and they wed. Edna leaves town.
Reprints

Too Late for Love! (Table of Contents: 6)

Genre
romance
Characters
Doris Kallen; Jeff Taylor; Mrs. Kallen; Mr. Kallen; Mr. Jenkins; Mr. Briggs
Synopsis
Office worker Doris is habitually late for everything. She falls in love with lawyer Jeff, but her procrastination in typing a brief for him causes him to miss out on a junior partnership. He says she’s too irresponsible for marriage and they break up. Doris confesses that the late brief was her fault, hoping Jeff will have a second chance. She also tries to change her tardy and careless ways. Jeff, who got the partnership, reconciles with Doris.