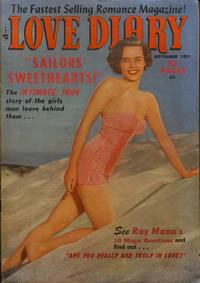 Genre
romance
Characters
Joe Whittaker; Nella Boland; Mrs. Boland; Eddie Conroy; Mr. Richards; Blanche
Synopsis
Nella and U.S. Navy sailor Joe fall in love. Joe’s battleship prepares to sail for Korea; he wants to wait until he returns to marry Nella. They argue. After he’s gone, the lonely Nella takes a job at the Harbour Inn club but quits when the owner makes a pass at her. Joe is reported missing in action. Upset, Nella goes to work in a dance hall; Joe shows up and rejects her as a “sailor’s sweetheart.” The upset Nella runs out and is hit by a car. Joe apologizes and she will recover.

Characters
Bill Waring; Paula Meade; Julie Stimson; Mr. Stimson; Jerry; Diana
Synopsis
Aircraft plant engineer Bill is a womanizer. He falls in love with Julie, daughter of the company’s vice-president, but continues to date other women as well. Feeling jealous when he sees Julie with another man, Bill burns his little black book and vows to be faithful to her. One of his ex-girlfriends, Paula, tries to commit suicide. Paula survives but Julie dumps Bill because she can’t trust him. She marries someone else and Bill is left alone.

This is a rare example of a romance comic story told from a man's viewpoint (and narrated by a man).

Secrets From a Love Diary (Table of Contents: 3)

First Line of Dialogue or Text
Many people with disturbing problems...
Genre
romance
Characters
Ray Mann; Barbara N.; Helen N.; Paul
Synopsis
Barbara’s older sister Helen takes care of her after their parents die, sacrificing her own personal life. Barbara falls in love with Paul and they plan to marry, but Helen falls into depression and Barbara asks Paul to postpone the wedding. Paul says she must choose: him or Helen. Barbara asks Ray Mann for help, and Ray passes the buck to the readers of Love Diary.

I Loved My Boss (Table of Contents: 5)

Genre
romance
Characters
Harvey Logan; Georgia; Jim; Ann Hamilton; Russell; Georgia's father
Synopsis
Georgia’s father insists she stop being frivolous and look for a job. Trying to avoid being hired, she dresses plainly but she gets a position as secretary for handsome Harvey. Georgia develops a crush on Harvey, even though he’s engaged to snobbish Ann. Harvey and Georgia fall in love, but they’re caught in an embrace by Ann and Georgia flees. She thinks Ann and Harvey have been married, but Harvey shows up and says he loves Georgia.

The Life of the Party (Table of Contents: 6)

Genre
romance
Characters
Kathy; Cliff; Betty; Grace; Jim
Synopsis
Kathy has the reputation as the “life of the party.” She dates Cliff but he’s turned off by her wild, attention-seeking antics. She tones down her act and they plan to be married. However, when she meets his parents, Kathy tries too hard to win their approval and winds up acting the fool. Cliff breaks up with her. Kathy changes her extroverted behavior and Cliff comes back to her.