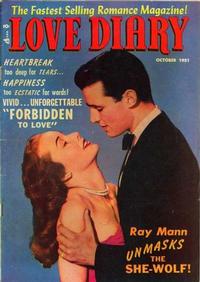 Forbidden to Love (Table of Contents: 1)

Genre
romance
Characters
Janie Burns; Aunt Sarah Stillwell; Cary Stillwell; Jurgens; Isobel Lewes
Synopsis
Janie is hired as companion to wealthy Sarah, and is attracted to her employer's handsome nephew Cary. Aunt Sarah warns Janie that Cary was jilted by actress Isobel and will never fall in love again. Cary and Janie fall in love regardless, but Isobel returns. Janie thinks she’ll lose Cary but he tells her Isobel is a “ruthless man-chaser” and he prefers Janie.

Genre
romance
Characters
Ellen Francis; Toby Hunter; Hal Hendricks
Synopsis
Secretary Ellen’s boyfriend Jim is killed in an auto accident; she dates Hal, and he drowns in a boating accident. Several years later, she dates salesman Toby; they fall in love but she refuses to marry him, fearing she is cursed. However, when Ellen falls through a rotten floor in Toby’s old family mansion, she understands that Jim and Hal died because of their own carelessness. Toby rescues Ellen and they will be married.
Reprints

Art credit from the reprint.

First Line of Dialogue or Text
Dear Readers: this month we have a personal message for you from Ray Mann
Genre
romance
Characters
Ray Mann; Anne B.; Matt Templeton; Mrs. Templeton; Sandra Templeton; Cecily
Synopsis
Singer Anne and lawyer Matt fall in love, but Matt’s family doesn’t approve of her. Matt, who could lose his position in the family law firm if they wed, insists he wants to go ahead with the marriage. Anne comes to Ray Mann for advice, and he asks Love Diary readers to help out.

The Right Man for Me (Table of Contents: 4)

Genre
romance
Characters
Wilma Taylor; Gil Watson; Paul; Mr. Taylor; Mrs. Taffy
Synopsis
Wilma has a good job in the city and a boyfriend, Paul. She’s called home to the family farm when her father falls ill. Wilma prefers city life but farm hand Gil says the country is in her blood. They fall in love but Paul arrives to take her back to the city and, since Gil tells her to make up her own mind, Wilma leaves. Once back in her old life, Wilma realizes how shallow and empty everyone is. She goes back to the farm and Gil.