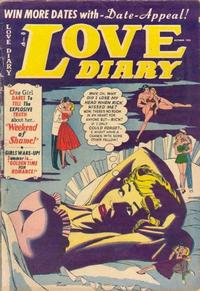 Weekend of Shame (Table of Contents: 1)

Genre
romance
Characters
Nella Brown; Johnny Pitts; Bruce Reed; Gail Harmon; Martha Blake
Synopsis
Office worker Nella goes to a lakeside resort on vacation, hoping she can escape her reputation as a "wallflower." However, she is awkward and doesn't seem to fit in, so she accepts an invitation for a moonlight stroll from known wolf Johnny. She barely eludes his lecherous advances. Her roommate Gail gives her a makeover and tells Nella to have confidence in herself. Nella makes new friends and even attracts handsome Bruce, so now she can tell creepy Johnny to take a hike.

First Line of Dialogue or Text
Like so many other girls in need of counsel, Sally G. came to the office of Ray Mann, seeking help.
Genre
romance
Characters
Ray Mann; Sally G.; Jean G.; Randy
Synopsis
Sally moves to the city to live with her sister Jean. She and Jean's boyfriend Randy are mutually attracted, and fall in love. Randy says he was never serious about Jean, but Jean thinks her sister stole him from her. Sally asks Ray Mann for advice: she doesn't want to lose Randy or her sister. Ray says the readers of Love Diary have never failed to answer a call for help.

Ray Mann is off-model in this story, with brown hair instead of black.

Genre
romance
Characters
Rick Martin; Linda Lewis; Ed; Marge; Mrs. Lewis; Bill Saunders
Synopsis
Linda gets a summer job as a car hop in a resort town. Kitchen helper Rick is assigned to orient her. Rick falls for Linda and while she is attracted to him, she wants to find a rich husband. She changes her mind and confesses she loves Rick, but he thinks it's only because she discovered he's the heir to a chain of restaurants (she really didn't know). Linda writes a letter to her mother telling the truth about her feelings for Rick, but accidentally switches it with her letter of resignation. Rick reads her letter and realizes she's sincere. They reconcile with a kiss.