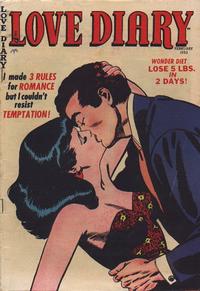 Stars in her Eyes (Table of Contents: 1)

Genre
romance
Characters
Lynn Baldwin; Hal Rogers; George Peters; Glenn Graham; Martha Webster; Judy
Synopsis
Lynn becomes star-struck after being successful in a small town summer theatre show. She asks her boyfriend Hal to wait while she tries her luck in the big city. Lynn is forced to take a job as a clerk in a drugstore but one day gets a part in a show. Hal agrees to move to the city and find a job. Lynn is a hit but Hal finds the theatrical milieu phony and goes home. Lynn dates director George on the rebound, then learns he’s just using her to further his own career. She returns to her hometown and reconciles with Hal.

Lynn's last name is Baldwin but she's called "Miss Drake" on page 7. Hal's hair changes from brown to black and then back again.

Genre
romance
Characters
Jan; Peter Stratton; Lorraine; George; Claire; Tommy; Sandra
Synopsis
Upset at a recent breakup, Jan rejects her friend Lorraine’s invitation for a New Year’s Eve blind date, then changes her mind. She’s paired with Peter, who romances her and gets a passionate midnight kiss. The next day she’s remorseful, because she’d vowed never to fall for a man again. She continues to date Peter, but refuses to acknowledge that she cares for him. Finally compelled to say she loves him during a party game, Jan is pleased and surprised when Peter reciprocates her sentiments.

Genre
romance
Characters
Ray Mann; Gertrude L.; Jack
Synopsis
Gertrude falls in love with Jack, then learns he has a gambling addiction. She asks Ray Mann what to do: she loves him but his gambling means they’ll never have a secure life.

Art credits from the French fan magazine Back Up #14, as submitted by Stephane Petit, via the GCD Errors list, February 2009. Additional info per the John Buscema checklist built by Jim Vadeboncoeur Jr and Michel Maillot.

Genre
romance
Characters
Sheila; Guy Manders; Sheila's mother; Mary Nelson
Synopsis
Sheila and telephone lineman Guy fall in love, but she’s excessively cautious and pessimistic about life, always fearing and expecting the worst. Guy eventually gets fed up with her fears, calling her “a selfish neurotic!” She promises to change her ways, but later tries to convince him not to work during a flood emergency, afraid he’ll be killed. Realizing her love for Guy is greater than her fear, Sheila pitches in to help during the rescue operation. Now she and Guy can live a normal, happy life together.