What Men Dislike Most About Women (Table of Contents) 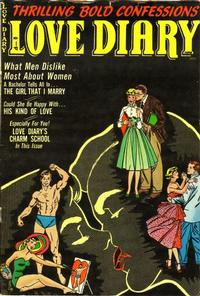 His Kind of Love! (Table of Contents: 1)

Genre
romance
Characters
Skeets Bradley; Mindy Carew; Binky Barnett; Hank Stevens; Chuck
Synopsis
Student teacher Mindy and her friends go to Mardi Gras on vacation. Mindy falls for jazz player Skeets, “a wizard with the clarinet!” She decides to stay in New Orleans with him, but he doesn’t seem to care about being financially rewarded for his genius. Seeing the poverty-stricken old age of jazz great Binky reinforces her concern. Skeets agrees to audition for a secure job with Hank’s orchestra but fails to show up. Mindy calls him a “music hobo” and they break up. She gets a teaching job and tries to forget him. Skeets reappears: he took the orchestra job and now they can be married.
Keywords
jazz

The Girl That I Marry (Table of Contents: 2)

Genre
romance
Characters
Jeffrey Holmes; Lisa Hamilton; Jane; Ellen; Joe; Lionel; Mike
Synopsis
Architect Jeff is a confirmed bachelor because his married friends have wives that are clinging, jealous, and quarrelsome. Jeff falls for Lisa but eventually discovers she is at times quarrelsome, jealous, and dependent. He tries to break up with her but Lisa says “I’ll be any kind of person you want me to be,” and he decides she is good enough to marry, after all.
Reprints

Art credits from the French fan magazine Back Up #14, as submitted by Stephane Petit, via the GCD Errors list, February 2009.
Additional infos come from the John Buscema checklist built by Jim Vadeboncoeur Jr and Michel Maillot.
Writer credit by Martin O'Hearn.

Secrets from a Love Diary (Table of Contents: 3)

First Line of Dialogue or Text
Many people with love problems seek the expert counsel of Ray Mann!
Genre
romance
Characters
Ray Mann; Connie H.; Tom Ryan; Ralph Linton
Synopsis
Connie gives in to the romantic proposal of Tom, a member of her social group whom she likes but doesn’t love. He’s drafted and sent to Korea. She keeps up the pretense of loving him, but agrees to date Ralph. Connie discovers Ralph is her true love, and Ralph says she must tell Tom that it’s over between them. Connie asks Ray if it is right to break Tom’s heart while he’s serving his country overseas.
Keywords
Korean War

Ray Mann has brown instead of black hair this issue.

Genre
romance
Characters
Corinne; Stewart Reed; Corinne's father; Corinne's mother
Synopsis
Corinne falls for fellow college student Stewart, but he’s something of a radical who works for the campus newspaper and clashes with the dean. Corinne’s parents disapprove of Stewart’s troublemaking, since “a reformer usually has a disturbed personality!” However, Stewart and Corinne find an old newspaper article which proves Corinne’s parents were also “reformers” in their day: her mother was arrested as a suffragette and her father was arrested trying to help her. Corinne’s parents admit that people can “settle down” after college, and approve their daughter’s choice of a boyfriend.