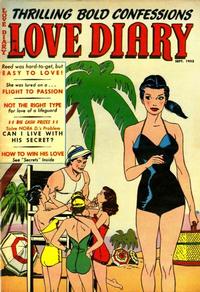 Flight into Passion (Table of Contents: 2)

Genre
romance
Characters
Jim Torrance; Louise
Synopsis
Airline hostess Louise has a crush on pilot Jim. They’re stranded in a mountain cabin one night and are overcome by passion. Afterwards, Jim is cool towards her, but when she’s injured during a flight he admits he loves her, even though her actions in the cabin prove she wasn’t a decent young woman. Louise vows to someday regain Jim’s respect despite having “yielded to temptation.”

It's pretty obvious in this story that Jim and Louise have premarital sex in the cabin.

First Line of Dialogue or Text
Through this door hundreds of people have passed...
Genre
romance
Characters
Ray Mann; Nora; Frank
Synopsis
Lonely waitress Nora dates customer Frank and they fall in love. She discovers he’s married, but he says he will be “getting a divorce one of these days!” Nora breaks up with him, but Frank claims he loves her. She asks Ray Mann for his help in resolving her problem.

Nora works in the "Marvel Restaurant."

This is the third issue in a row that Ray Mann has brown hair, whereas in most previous issues his hair was black.

Not the Right Type! (Table of Contents: 4)

Genre
romance
Characters
Bill Rand; Edith; Tod
Synopsis
Expert swimmer Edith has a crush on handsome lifeguard Bill, but he seems to prefer women who just lounge on the beach. Edith’s brother Tod tells her “no guy likes his girl to be a female Tarzan” and advises her to pretend to be “soft and feminine and helpless.” Edith tries, but when Bill is injured trying to rescue a drowning boy, Edith dives in and saves them both. Bill tells her that he prefers “someone who’s a real person and not just a pretty doll in a bathing suit,” and they kiss.