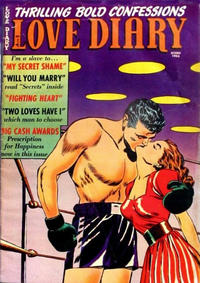 Genre
romance
Characters
Davey Brock; Sheila; Al Martine; Hank Strong; Sherry Bryan
Synopsis
Boxer Davey wins an amateur championship and turns pro for manager Martine. Davey’s girlfriend Sheila worries that Davey’s personality is changing for the worse as he becomes more successful in the ring. They eventually break up. Sportswriter Hank warns Sheila that Davey is being set up for a big fall by Martine, who’ll clean up by betting against him. Hank loves Sheila but he understands when she returns to Davey after his loss in the big fight.
Keywords
boxing

Two Loves Have I! (Table of Contents: 2)

Genre
romance
Characters
Kent Marlowe; Mary Anders; Bob Marlowe
Synopsis
Mary and Bob are in love, but she’s impressed when Bob’s radio announcer brother Kent arrives in town. Bob asks his brother to keep Mary company while he’s out of town on business, and one thing leads to another: Kent and Mary fall in love. Bob finds out and is angry. Mary is notified that a “Mr. Marlowe” has been injured in an accident and doesn’t know which brother it is. She realizes she loves Bob, and although he’s the injured one, he’ll recover. Kent withdraws like a gentleman.

First Line of Dialogue or Text
Within the confines of Ray Mann's private office...
Genre
romance
Characters
Ray Mann; John W.; Alice; Mrs. W.; Marian W.; Junior W.
Synopsis
After his father’s death, John goes to work to support his mother, brother and sister. He becomes manager of a cinema, shelves his own college plans, and puts his brother through medical school and pays for his sister’s education as well. John and cashier Alice fall in love, but his mother asks him to postpone his wedding because she doesn’t want his siblings to have to contribute to her support. Alice thinks John’s brother and sister should pay their share, and suggests John ask Ray Mann for his opinion.

My Secret Shame! (Table of Contents: 5)

Genre
romance
Characters
Janie Morton; Mark Trevor; Bob; Mr. Trevor; Mrs. Trevor; Johnny
Synopsis
Janie finds alcohol helps her overcome her shyness. As time goes by, she needs more than one drink to achieve the same result. Janie dates co-worker Mark, and he notices her alcohol consumption. He promises to help her overcome her social anxiety without liquor. However, Janie gets tipsy when she meets Mark’s parents and he says “you’re a weakling and an alcoholic” and breaks up with her. Janie kicks the habit and Mark comes back to her.
Keywords
alcoholic

Art credits from the French fan magazine Back Up #14, as submitted by Stephane Petit, via the GCD Errors list, February 2009.
Additional art infos come from the John Buscema checklist built by Jim Vadeboncoeur Jr and Michel Maillot.