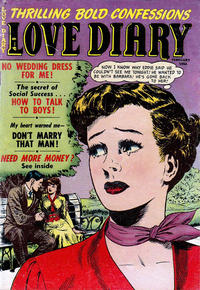 Genre
romance
Characters
Ann; Owen Robbins; Jeff Cameron; Uncle Fred; Aunt Ella
Synopsis
As a teen, Ann lives with her brutish Uncle Fred and downtrodden Aunt Ella. Ann is abducted and nearly raped by an escaped convict, but is rescued at the last moment. In college, Ann dates Jeff but has a flashback to her earlier ordeal and panics when he kisses her, earning a campus reputation as “the human icicle!” Ann and young professor Owen fall in love but she can’t overcome her fear of men. When they’re trapped in a forest during a storm, Ann tells Owen her story and discovers her repressed fear is now gone. She can now reciprocate his love.

Genre
romance
Characters
Jill Conlin; Tex; Ellen
Synopsis
Jill wants to quit her trick-riding job with a rodeo and settle down to raise a family. She is attracted to fellow performer Tex, but doesn’t think rodeo men are capable of giving up their wandering lives for a home life. Tex is injured by a bull and decides to retire to run a ranch. Jill agrees to marry him.

First Line of Dialogue or Text
Few people are ever granted a look into the heart of a woman in love!
Genre
romance
Characters
Ray Mann; Renee T.; Sam Howell; Mrs. Howell
Synopsis
Model Renee meets Sam, a college-educated farmer, and they fall in love. Sam’s mother wonders if Renee can give up her glamorous life to be a housewife on a farm. Sam visits Renee in the city, and says she must choose between her modeling career and marriage to him. Renee isn’t sure, and goes to Ray Mann for assistance. As usual, he passes the question to Love Diary readers.

Ray Mann is back to having his usual black hair in this issue after changing to brown for the previous 5-6 issues.

No Wedding Dress For Me! (Table of Contents: 4)

Genre
romance
Characters
Cynthia; Eddie Matthews; Judy
Synopsis
Cynthia meets lawyer Eddie at a church social and they begin to date, but he’s still upset because his former girlfriend dumped him. He tries to forget her and eventually proposes to Cynthia. She picks out her dream wedding gown, then learns Eddie’s ex is back in town. Cynthia is sure Eddie will resume his romance with the other woman. He shows up and says now he’s sure that Cynthia is the only woman he will ever love. Cynthia doesn’t get her formal church wedding and fancy wedding gown: she rushes Eddie to a justice of the peace for a quick ceremony, to seal the deal.