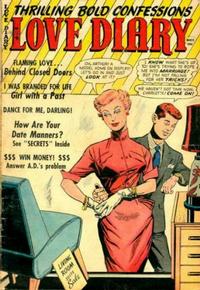 Behind Closed Doors! (Table of Contents: 1)

Genre
romance
Characters
Neil Garson; Joan; Margo; Joe; Mr. Nelson; Mrs. Nelson; Nancy Nelson; Mr. Caspar; Sheila Caspar; Peter Caspar; Sandra; Mrs. Garson; Bob
Synopsis
Joan works as a babysitter in the town of Glenvale, and sees the bad side of many residents. She’s hired to accompany invalid Mrs. Garson to the park each day by the lady’s son, architect Neil. Joan develops a crush on Neil, but he’s engaged to Margo. Joan doesn’t trust Margo, who’s a gold-digger and nasty to Mrs. Garson. Neil and Joan fall in love, and when Margo catches them, she reveals her true, unpleasant personality. Neil and Joan will wed.

Margo refers to Joan as a "teen-aged slut," which is pretty strong language for a comic book in this era.

The Girl With a Past! (Table of Contents: 2)

Genre
romance
Characters
Jean; Harry; Jim Barton
Synopsis
Jean learns her boyfriend Harry is a married man when they’re caught by divorce detectives. She leaves town due to the scandal and becomes a librarian in the city. Jean vows to avoid men and tries to discourage Jim when he approaches her. They eventually become friends but she rejects him when he parks his car and tries to kiss her. Jean decides to leave town but Jim shows up. She explains her past and Jim says she isn’t a cheap pick-up: he wants to marry her.

First Line of Dialogue or Text
Through the magic portals of Ray Mann’s office come many troubled souls
Genre
romance
Characters
Ray Mann; Arthur D.; Charlotte
Synopsis
Arthur’s girlfriend Charlotte is spoiled and selfish. When she insists they buy a house too far from his work, Arthur breaks their engagement. Charlotte apologises and says she can change, but Arthur isn’t sure. Will she go back to her old habits after the wedding? He asks Ray Mann for advice.

Dance for Me, Darling! (Table of Contents: 4)

Genre
romance
Characters
Irene Riley; Red Dawson; Mr. Riley; Mrs. Riley; Roger Berchley
Synopsis
Dancer Irene is turned down after a TV show audition but makes friends with comedian Red, who advises her to get more training if she is serious about her career. Irene’s parents are opposed to this, as is her boyfriend Roger, but Irene moves to the city and studies intensely. She gets a job on a show and reunites with Red. After her debut, Irene is harshly criticised by her parents and Roger. Red stands by her and they realize they are in love.