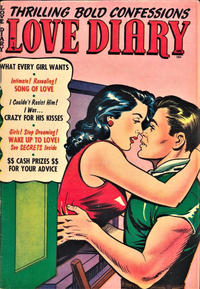 Our Song of Love! (Table of Contents: 2)

Genre
romance
Characters
Carol; Eric Petri; Johnny; Marty Breck; Al Bargo
Synopsis
Music teacher Eric directs a small town operetta production starring Carol. After the show, he urges Carol to attend the Jullette School of Music and Drama where he teaches. They eventually fall in love, but Carol wants to earn money as a singer so they can be married and Eric is opposed. She agrees to sing in Marty’s nightclub and breaks up with Eric as a result. Carol becomes Marty’s girl, but he's a crook and tells her to “be nice” to a visiting gangster. She’s nearly raped before Eric comes to her rescue. They get back together.

The "Jullette School of Music and Drama" is probably a reference to the Julliard School in New York City.

What Every Girl Wants! (Table of Contents: 5)

Genre
romance
Characters
Emily; Charlie; Grandma; Grandfather (flashback); James Nelson; Nancy
Synopsis
Emily is engaged to Charlie, but finds him boring and unromantic. She asks her grandmother for advice, and is told a story of how a wayward hat brought her and her future husband together. Emily borrows the hat and has a spontaneous romantic encounter with James. Charlie has to settle for Nancy, James’ cousin, because Emily and James are in love.

Secrets From a Love Diary (Table of Contents: 6)

First Line of Dialogue or Text
By an exclusive arrangement with Ray Mann, famed love counsellor, Love Diary is able to bring you actual cases from his files!
Genre
romance
Characters
Ray Mann; Leila F.; Phil
Synopsis
Leila and Phil fall in love but at the end of the summer he has to return to college for a year. Leila wants to get married before he leaves, but Phil’s father urges them to wait. Leila becomes angry and they argue. She tells Ray Mann that she’s sure Phil will forget her if he goes away for a whole year, so she wants to marry Phil right now.

Crazy For His Kisses (Table of Contents: 10)