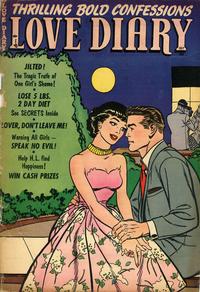 Genre
romance
Characters
Richard Blanchard; Donna Woolsey; Mrs. Woolsey; Beverly; Joe Lawrence; Linda
Synopsis
Rick and Donna are to be married in a week, but he meets Beverly at a party and leaves Donna at the altar. Donna pretends to be over the shock and says she’s dating other men. Confronted by a friend on the street, Donna introduces Joe, a stranger, as her boyfriend. Joe, a clerk in a hardware store, asks for a date later and she agrees, but lies and tells her friends at the office that he’s rich. Joe and Donna fall in love but Rick returns and says he still loves her. Joe is angry, but when Beverly shows up and makes a scene, Joe gets Donna away and she realizes he’s the man for her.

Speak No Evil! (Table of Contents: 2)

Genre
romance
Characters
Ann; Betty; Dick Grover; Claire Weber; Bob Anderson; Hank Green; Jane Green; James Clawson; Mrs. Clawson
Synopsis
Ann has a sharp tongue and her sarcastic remarks ruin friendships and romances. She dates printer Bob but angers him by insulting his friends Hank and Jane. At a dinner with a prospective client of Bob’s, Ann makes a wisecrack that costs Bob business and, indirectly, their chance to get married soon. Bob breaks up with her. Ann confesses her problem to Jane and vows to change her ways. Bob says he’ll marry her “now that you’ve proved you’re ready to learn!”

First Line of Dialogue or Text
Let's listen to the problem of Helen L...
Genre
romance
Characters
Ray Mann; Helen L.; Chris
Synopsis
Chris and Helen are engaged, but when he informs her that he’s being sent to South America to do research, she protests. Helen doesn’t want to live thousands of miles from her friends and family, even if it would be good for Chris’s career. They argue. Helen comes to Ray Mann for advice: she loves Chris but still doesn’t want to move to South America.

Genre
romance
Characters
Tod Andrews; Evelyn; Ralph
Synopsis
Evelyn is attracted to “rough, virile” construction worker Tod, even though she has a boyfriend (Ralph) and Tod makes it clear he doesn’t want to settle down with any one woman. However, Evelyn and Tod fall in love and she thinks she’s “tamed [his] wild, restless spirit!” Tod vanishes and Evelyn fears he’s gone forever, but he comes back for her. They get married and the birth of their son finally convinces him to settle down.

Art credits from the French fan magazine Back Up #14, as submitted by Stephane Petit, via the GCD Errors list, February 2009.
Additional infos come from the John Buscema checklist built by Jim Vadeboncoeur Jr and Michel Maillot.
Woolfolk credit from Martin O'Hearn at http://martinohearn.blogspot.com/