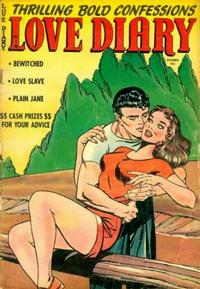 Characters
Roxy Vinson; Mrs. Martin; Beth Martin; Stephen Ames
Synopsis
Stephen, a new arrival in town, asks flashy Roxy for a date. He is embarassed by her crude ways and uncouth friends, but is strangely captivated with her. This causes him to ignore Beth, the daughter of his landlady, who is a decent girl. Roxy takes money from Stephen under false pretenses and he realises he’s been foolish. He and Beth date, then fall in love. Roxy tries to win him back, but Stephen won’t fall for her tricks again.
Reprints

First Line of Dialogue or Text
I am Ray Mann, Love Diary's human relations...
Genre
romance
Characters
Ray Mann; Ruth S.; Dirk E.; Mrs. S.
Synopsis
Ruth and Dirk become engaged, against her mother’s wishes. After a drunken car crash, Dirk is sent to prison for five years for manslaughter. Ruth promises to wait for him, but her mother says this would be foolish. Ray Mann asks Love Diary readers for their opinions.
Reprints

Genre
romance
Characters
Carla; David; Ray Moore
Synopsis
Carla goes to a resort hotel on vacation. Boxer Ray Moore is training nearby, and she becomes infatuated with him, although she’s engaged to David. When David comes to visit, Carla confesses all. David and Carla overhear Ray boasting about winning a bet that he could seduce Carla. David punches Ray and leaves with Carla, who realises she nearly made a terrible mistake.
Reprints
Keywords
boxing

They Called Me Plain Jane (Table of Contents: 6)