Guns on the Tombstone Trail! (Table of Contents) 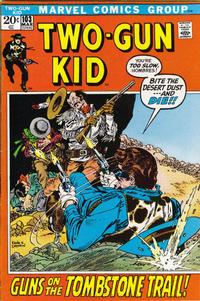 Bite the Desert Dust and Die (Table of Contents: 1)

last app. in KID COLT OUTLAW #141. This is an inventory circa 1967 which Steve Englehart did some rewriting on. Engelhart's credit is from http://www.steveenglehart.com/Comics/First%20Marvel%20Scripts%20I.html

How Matt Hawk becomes the Two-Gun Kid! (Table of Contents: 2)

Guns Blaze on the Tombstone Trail (Table of Contents: 3)

Mask and Costume added to conform to present look. Original Two-Gun Kid's name of Clay Harder inadverdently remained in the copy. Illustration may be from Two-Gun Kid # 53.