Some researchers believe that Tony DeZuñiga may have employed others to help with this cover but no definitive conclusion has been reached. Alfredo Alcala or Nestor Redondo inks suggested by Fred Snyder via the GCD Error Tracker. Credits in Weird Western Tales: Jonah Hex (DC, 2020 series) credit only Tony DeZuñiga for this cover. 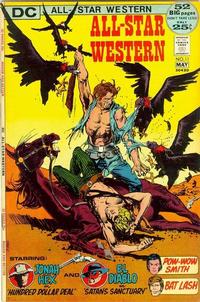 Job Number
J-1421
Genre
western-frontier
Characters
Jonah Hex; Terry; Wes; Amy; Jerome P. Courtney
Synopsis
Jonah helps Terry based on his claim that he is innocent and will pay Jonah $100 to help him get back to his home.
Reprints

Reverse coloring of the page number on page #13 indicates that John Costanza lettered this story.

Job Number
J-1589
First Line of Dialogue or Text
Dear Joe, First of all, I have to thank you...
Genre
western-frontier

The Buffalo-Hide Bandits! (Table of Contents: 4)