...And Through Him Save a World! (Table of Contents) 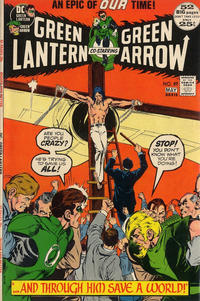 Job Number
S-1046
Genre
superhero
Characters
Green Lantern [Hal Jordan]; Green Arrow [Oliver Queen]; Isaac; Barbie Dole; Barnaby Catts; Carol Ferris; Mr. Tyrone
Synopsis
Green Arrow goes with Green Lantern and Carol Ferris to the Ferris Aircraft plant in Abraham, which has been the target of ecological prankster Isaac. When Isaac accidentally threatens Carol, GL tries to take him into custody, but GA gases him. Offended at this abuse of the atmosphere, Isaac turns his back on Green Arrow. Ferris security subdues GA and gathers the passed out GL. Finding Isaac has lashed himself to an aircraft engine, Ferris security straps GL and GA to the tail wings of two planes and leaves Isaac where he is to die. GA frees himself, but not in time to save Isaac.
Reprints

A Blockbuster (Table of Contents: 5) (Expand) /