The Glass Nightmare (Table of Contents) 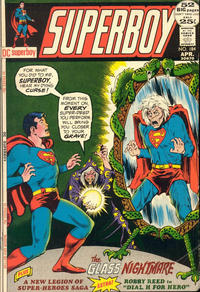 The Glass Nightmare (Table of Contents: 1)

One Legionnaire Must Go! (Table of Contents: 3)

Lettering credit from reprint in Legion Archives. As Dave Cockrum explains in the foreword to that volume and elsewhere, the art credits were flipped on this story because he was a novice and the editor did not want to offend the veteran Murphy Anderson.