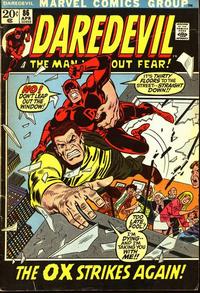 This Ox has the brain of the original Ox, transferred into Dr. Karl Stragg's body. A test of pharmaceutical isotopes in prison causes him to have less than a month to live, but also transforms him into the Ox.

More Messages, Memos, and Memoranda from Your Mixed-Up Marvel Minions! (Table of Contents: 2)

Stan's Soapbox has an essay inspired by the Attica State Prison incident, discussing "right" and "wrong." In other news, Hero for Hire will be debuting soon and My Love and Our Love Story are featuring original stories again. There's a promotion for membership in The Academy of Comic Book Arts, now entering its second year with president Dick Giordano, vice-president Neal Adams, secretary Mimi Gold, and treasurer Sal Amendola. Herb Trimpe has returned from a vacation in Europe and John Buscema is a partner in a new steakhouse called the Sunset Inn, located in Sayville, Long Island, N.Y. Also the Mighty Marvel Checklist of Marvel comics "now on sale!"