This is the last issue of Justice Machine published by Innovation.

The Cataclysmic Conclusion to the Justice Machine Saga! (Table of Contents)

This issue has a partial wrap-around cover. 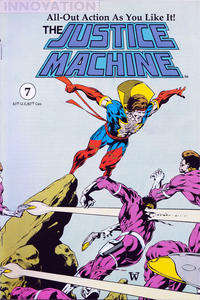 Last Man on the Battlefield (Table of Contents: 2)

First Line of Dialogue or Text
To save the Justice Machine,
Genre
superhero
Characters
The Justice Machine [Challenger; Diviner; Demon; Titan; Talisman; Blazer]; Garrison Larson; the Oyabun; Yasuhiro; Lt. Duvat; Maxinor; Youthquake; Tessei Conrad Maxinor (Blazer’s and Youthquake's daughter)
Synopsis
It’s all out war as the Oyabun’s superhuman warriors try to take out the Justice Machine. Meanwhile, Demon adopts his first costume and makes a deal with Maxinor. Maxinor teleports Lt. Duvat, Diviner, Blazer, and Garrison to a U.S. hospital, then takes Youthquake back to Georwell forever. Demon then teleports Titan, Talisman and Challenger the same way, leaving only him to defeat the Oyabun’s hordes. The Oyabun himself dies horribly after being poisoned by one of his slaves. The Machine -- without Demon-- then gathers together to meet Blazer’s daughter, Tessei Conrad Maxinor.

This is a black and white story. It is interesting to note that Demon has all of his fingers on his left hand, after supposedly cutting one off for the Oyabun last issue.

A few fan letters and a fond farewell from Tony Isabella. Letter from Jim Kelly.