The on-sale date is from the publication date recorded in the Catalog of Copyright Entries, Part 2, Periodicals, 1942, New Series, Vol. 37, No. 4.

Stampede of the Slave-Masters (Table of Contents) 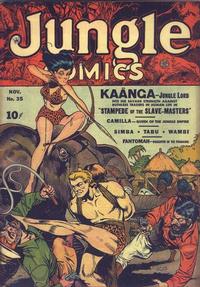 Stampede of the Slave-Masters (Table of Contents: 1)

First Line of Dialogue or Text
A swarthy Bedouin seizes a crude peasant hut at the edge of Khefra.
Genre
jungle
Characters
Ibn Raj (introduction, villain, death); Fantomah; Horus; Fury (leopard)
Synopsis
Arabs seize Khefra and begin to loot it. But when Fury frees the Khefran soldiers and Fantomah, the tide turns and the Arabs are driven into the sea.
Keywords
camels; stereotyping of Arabs

First Line of Dialogue or Text
In the darkness of the steaming jungle, Tabu pits his strength and cunning against the sinister prowlers of the murderous leopard clan!
Genre
jungle
Characters
leopard men (introduction, villains); a priestess (introduction); Tabu; Jasu; Matus (African tribe)
Synopsis
The Matu village priestess, working in secret with a leopard cult, prepares to lead her people to a new part of the jungle. Tabu exposes her alliance and discovers that she was planning to sell the village to white men.
Keywords
bondage; gorillas; leopard cults

Wambi and the Reign of Jungle Terror (Table of Contents: 6)

First Line of Dialogue or Text
Camilla, queen of the jungle, sets out to visit an old friend.
Genre
jungle
Characters
Camilla; unnamed tribal woman (introduction); Trader Davis (old friend of Camilla's, introduction); Toyo (villain, a monkey, introduction); The Renegade (villain, introduction); Renegade's gang (villains, group of bandits, introduction for all)
Synopsis
Camilla saves her old friend, Trader Davis, from a water buffalo. She learns a native tribe, led my a white man, has attacked his trading post, stealing guns and ammunition with the purpose of stealing a village's ivory and its men. Camilla rescues the the men and recovers their ivory.
Reprints
Keywords
howdahs; ivory; slave coffle; slavers; whips

Victor Ibsen is a byline used on this strip by the publisher.