Cover code: 90296-202. No interior ads in this issue. All 32 interior pages are comics or comics-related text material.

[Who Watches the Watch-Juggler?] (Table of Contents) 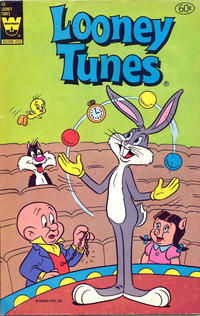 A possible allusion to the famous Warner Bros. film "The Maltese Falcon"? This particular bird statue is decidedly not “the stuff dreams are made of”!

First Line of Dialogue or Text
Tweety and Sylvester have signed a truce during a joint -business venture…
Feature Logo
Tweety and Sylvester Dell Western Logo 1
Genre
anthropomorphic-funny animals
Characters
Tweety Bird; Sylvester Pussycat; potential customer; angry customer; bank robber
Synopsis
Tweety and Sylvester go into a joint venture to operate a haunted house attraction in an amusement park. Business is bad because the scares are much more hokey than scary. To get better ideas for scary attractions, they investigate a supposedly “real haunted house” and find the scares there to be just as hokey as their own – but rigged and operated by a bank robber using the place as a hideout.
Keywords
amusement park; bank robber; haunted house; hoax; partnership

First Line of Dialogue or Text
Daffy is not your ordinary plumber…
Feature Logo
Daffy Duck Dell/Western Interior 1
Genre
anthropomorphic-funny animals
Characters
Daffy Duck; dissatisfied customer #1; dissatisfied customer #2; envelope factory night watchmen; payroll thief
Synopsis
Plumber Daffy creates at least one new leak for every leak he stops… Usually a bigger one! His business is headed “down the drain” when he receives an emergency midnight call from an envelope factory with an unexplained water leak. Can Daffy save the envelope inventory from being glued worthlessly shut? And how does this tie in to the company’s payroll, locked in a safe one floor above?
Keywords
envelopes; flood; leak; payroll; plumber; safe; water pipe

The Wild Hare (Table of Contents: 6)

First Line of Dialogue or Text
Ah-h-h! It does me good to be at sea again, Rabbit… Even with you aboard!
Genre
anthropomorphic-funny animals
Characters
Yosemite Sam; Bugs Bunny; gorilla; island natives
Synopsis
Bugs and Sam are sailing the tropics, when a typhoon hits Sam’s ship and sweeps Bugs away. Bugs washes up on an island and is attacked by a gorilla. Vanquishing the gorilla by sheer luck and a well-placed coconut, Bugs is made leader of the grateful natives. Sam gets back into the picture in an unexpected way, and so does the gorilla.
Keywords
coconuts; gorilla; sea or island setting; ship; typhoon

The island natives honor Bugs with the quote: “You Wild Hare of Pingo Pongo!”, a declaration containing two classic Warner Bros. cartoon titles - “A Wild Hare” (1940, the seminal Bugs Bunny/Elmer Fudd hunting encounter) and “The Isle of Pingo Pongo” (1938, one of several Warner travelogue spoof cartoons), both of which were directed by Tex Avery. The stranded Bugs also refers to himself as "Rabbitson Crusoe", the title of a 1956 Bugs Bunny cartoon directed by Friz Freleng, co-starring Yosemite Sam. Too many instances to be coincidental. Nice job by the (alas) anonymous writer.