The Voodoo Doom of Superman (Table of Contents) 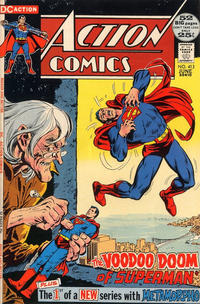 The Voodoo Doom of Superman (Table of Contents: 1)

Job Number
B-1590
First Line of Dialogue or Text
A truck full of tomatoes has overturned.
Genre
humor; anthropomorphic-funny animals; superhero
Synopsis
Super-Turtle helps a policeman by moving an overturned truck from Kosdanskio Street to Elm Street, which is easier to spell on his report.
Reprints

The Man Who Destroyed Eclipso (Table of Contents: 3)

Job Number
B-810
First Line of Dialogue or Text
Look! A real robot!
Genre
humor
Synopsis
A robot refuses to sit in the waiting room so its inventor decides not to patent him.
Reprints
Keywords
robot

The 7 Sins of Simon Stagg (Table of Contents: 5)

Job Number
B-1319A
Genre
superhero
Characters
Metamorpho; Sapphire Stagg; Simon Stagg; Java; Ulysses Bronson (villain)
Synopsis
Simon Stagg's old college roommate, Ulysses Bronson invites Simon Stagg and company to see his creation, Morality Mountain, which includes statues of three of the seven deadly sins. It will cost $1 million to finish the others and Stagg hands over a check. The group are later invited to the opening of Morality Mountain. Only Ulysses is there and he insists on showing Simon alone the exhibits. The statue of Pride has Simon's face and Ulysses plans to kill Simon. Meanwhile, Metamorpho strains to keep Sapphire and Java from a chemical soup that has filled the waiting room.
Reprints
Keywords
seven deadly sins

Where the Action Is / letters page / 1 page (report information)

The column reveals that Nick Cardy penciled and inked the cover to Action #409. It also reports that Nick Cardy drew the cover for the next Flash Super-Spectacular (The Flash #214, April 1972) with Quicksilver, a Golden Age hero first drawn by Nick Cardy.