"The Omac Project Tie-In" noted on the cover.
Diamond order code: MAY050216 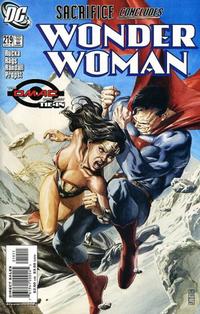 Genre
superhero
Characters
Wonder Woman; Superman [Clark Kent]; Max Lord (death); Batman [Bruce Wayne] (cameo)
Synopsis
Superman is under Max Lord's control, restraining Wonder Woman as she confronts Max. Superman and Wonder Woman fight, but finally she is able to make her way back to Max and ensnare him in her lasso. Max refuses to release Superman; she commands him to tell her how to free Superman from his control, and he responds, "Kill me." So she does, snapping his neck.
Reprints

Story continued from Adventures of Superman (DC, 1987 series) #642, and continues in the next issue.