Who Will Judge the Hulk? (Table of Contents) 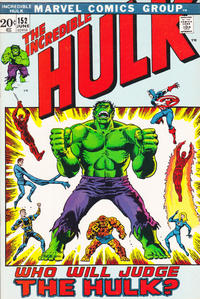 But Who Will Judge the Hulk? (Table of Contents: 1)

Job Number
938 Z
Genre
superhero
Characters
Hulk [Bruce Banner]; Captain America [Steve Rogers]; Matt Murdock [Daredevil]; Nick Fury; Fantastic Four [Mr. Fantastic; The Thing; Invisible Girl; Human Torch [Johnny Storm]]; Thunderbolt Ross; Black Widow [Natasha Romanova](cameo); J. Jonah Jameson (cameo); Peter Parker [Spider-Man](cameo); Hulkbusters; Richard Nixon; Spiro Agnew
Synopsis
After his recent rampage in Washington D.C., the president sends Nick Fury and Cap to help Ross capture the Hulk. They are successful and prepare to transport Bruce to New York to stand trial. During the plane ride, Bruce's lawyer, Matt Murdock, finds him so heavily sedated that he is only able to wallow in guilt and prepare for death. Matt invokes Bruce's civil rights and demands that Ross give him a stimulant so he can talk to his client coherently. Ross reluctantly complies and Bruce quickly turns into the Hulk. Hulk bursts from the plane to find the FF waiting for him on the tarmac of JFK.
Reprints

Credits on page one also note: "Aided by Herb Trimpe and practically the whole bullpen." Trimpe redrew many of the Hulk faces throughout the issue, the caricatures of President Richard Nixon and Vice-President Spiro Agnew and the Daredevil and Black Widow figures on page 12. Other artists who likely assisted include John Verpoorten, John Romita and Mike Esposito. Art credits per Nick Caputo.

In reply to a letter questioning the lack of coloring credits the author explained that because it is the last stage in the production process before engraving and the editors schedule is so hectic it's easier not to include the credit. The author also states that Marie Severin colors "most of our covers" and Mimi Gold is the regular colorist on the interior Hulk stories.