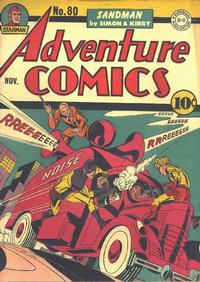 The Man Who Couldn't Sleep! (Table of Contents: 3)

Genre
superhero
Characters
The Sandman [Wesley Dodds]; Sandy [Sandy Hawkins]; Nick Parks; Felix Black (villain); Blackie (villain); Smokey (villain)
Synopsis
The Sandman is able to assist a new criminal who suffers from the lack of sleep and has taken up crime only because he hasn't had a wink of sleep in 40 years, and needs something to occupy the long nights!
Reprints

First Line of Dialogue or Text
You mean everything doesn't go?
Genre
humor

The Time-Machine Crime! (Table of Contents: 6)

The letterer is different on page 10 panels 3-7 and page 11 from the rest of the story and is definitely not Betty Bentley. Background inker credit by Craig Delich. George Roussos inks credit per Craig Delich.

Poland Lives On (Table of Contents: 7)

Adventure of the Desperate Dragons (Table of Contents: 8)

The Enigma of the Absent-Minded Artists! (Table of Contents: 12)

The Case of the Sponsored Crooks! (Table of Contents: 16)

Genre
superhero
Characters
The Hourman [Rex Tyler]; Thorndyke Tompkins; John Brown; Earl Adams; Mary Mode; Peter Fry; un-named radio show sponsor (villain)
Synopsis
Hourman and four people who are famous in the world of wealth and industry are invited to appear on The Radio Treasure Hunt Show, each having to retrieve some odd item, the first returning winning $1000. However, it is Rex Tyler (not Hourman) and Thorndyke who soon discover the pattern of resulting robberies occurring in the city, as they target the very people appearing on the show.

In this story, Thorndyke wears a partial Hourman costume with red cape having yellow trim and an hourglass about his neck. The last panel features Thorndyke giving a plug for the Americommando strip in Action Comics.