The World, My Jury! (Table of Contents) 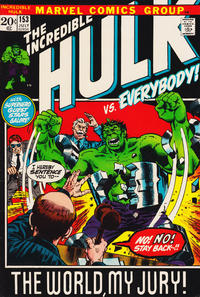 Job Number
774-Z
Genre
superhero
Characters
Hulk [Bruce Banner]; the Avengers [Captain America [Steve Rogers]; Iron Man [Tony Stark]; Thor; Scarlet Witch; Quicksilver; Vision]; Daredevil [Matt Murdock]; Foggy Nelson; Fantastic Four [Mr. Fantastic; The Thing; Invisible Girl; Human Torch [Johnny Storm]]; Thunderbolt Ross; J. Jonah Jameson (cameo); Spider-Man [Peter Parker](cameo)
Synopsis
On a runway at JFK airport, Mr. Fantastic brings the Hulk down with his newly devised Nega-Gamma Gun. The Hulk is placed in heavy restraints and is put on trial for his crimes. After testimony in the case, both pro and con, Matt pulls a stunt out of his lawyer's bag of tricks and quickly proves that the Hulk is too mentally incompetent to stand trial. As the judge tries to figure out how to proceed, Reed shows up with his special gun and claims it will change the Hulk into Bruce Banner for good. Instead, it provides the Hulk with the strength to break free and escape.
Reprints

This issue was originally produced as inventory when Marvel went to a 25 cent size. It was then published in 2 parts with additional pages. Art credits by page information from Error Report #1880, by Nick Caputo.

Reed's seeming act of mercy toward the Hulk at the end of the story turns out to be a sham as the last four panels depict the Hulk weakening and crashing into a building which covers him in rubble. This seems to indicate that Reed knew the Hulk would get a sudden burst of strength followed by debilitating weakness. The captions go even further and insinuate that Reed may have actually been trying to kill the Hulk. Regardless, the Hulk is up again next issue with nothing more than a scant reference to this incident.