ODDITY: Hawkman's green tights are missing on this cover. 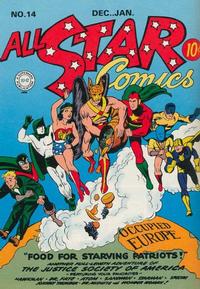 Inside front cover. The first Junior Justice Society of America code message in the Hawkman code is found at the bottom of the column.

Genre
superhero
Characters
Justice Society of America [Johnny Thunder; Dr. Mid-Nite [Dr. Charles McNider]; The Spectre [Jim Corrigan]; Wonder Woman [Diana Prince] (Secretary); Hawkman [Carter Hall]; Starman [Ted Knight]; The Sandman [Wesley Dodds]; The Atom [Al Pratt]; Dr. Fate [Kent Nelson]]
Synopsis
Chairman Hawkman announces to the members that two things must be accomplished quickly: 1) the freedom-loving peoples of Europe must be fed, and 2) this must be done without the knowledge of the Nazis. To accomplish this feat, Hawkman has created tiny food capsules that, once treated with a special solution, become complete dinners. Each member is to carry these capsules to a different European nation.
Reprints

The splash page is identical to the cover except for a few pieces of fruit missing.

Genre
superhero
Characters
Hawkman [Carter Hall]; The Sly One; the Nazis (villains)
Synopsis
Hawkman makes his way to an occupied city in France and meets up with a willing, but skeptical underground force. However, after a good meal, they tell the Feathered Fury about the man they call "The Sly One," who fearlessly fights the Germans, but has been captured by them. Hawkman and the underground take on the Nazis in order to free him, and Hawk promises them more food will be delivered in a dud bomb marked with an "X".
Reprints
Keywords
France; R.A.F.

Genre
superhero
Characters
Starman [Ted Knight]; The "Ghosts of the Polish Knights" [aka Bowmen of Mons]; the Nazis (villains)
Synopsis
Starman is headed for Poland, conquered already by the Nazis, but a nation not willing to entirely give up. He spots an ancient order of Poles called the Bowman of Mons, who at once think he is an enemy, but a good meal changes their minds. Starman volunteers to help the group free their imprisoned peoples, capture guns and weapons, and aid in the world-wide fight for freedom. Starman disguises himself as an informer and gives the Nazis a "secret code" to decipher consisting of pro baseball players batting averages. After mopping up the Nazis, Starman promises more food dropped by parachute.
Reprints
Keywords
Gravity Rod; Poland; R.A.F.

Genre
superhero
Characters
The Atom [Al Pratt; also as an unnamed Gestapo officer]; unnamed Dutch boy; Hilda; unnamed Gestapo officer (villain); the Nazis (villains)
Synopsis
The Atom arrives in Holland in disguise and helps wreck a small convoy of German vehicles, although he quickly captured and thrown into jail. Changing to his fighting togs, he bends the bars and escapes, soon meeting up with a young Dutch boy, whom he feeds along with many others. After dinner, the young boy shows the Atom Nazi artillery shells they have built, hollowed out, in which are encased maps of the locations of German secret hangers. They fire some shells where the R.A.F. can get hold of them and they arrive to bomb the hangers.
Reprints
Keywords
Holland; R.A.F.

Genre
superhero
Characters
Dr. Fate [Kent Nelson; also disguised as a Nazi Captain]; Adolf Hitler (villain); Herman Göring (villain); the Nazis (villains)
Synopsis
Hitler is having tea leaves read which indicate a visit soon by Doctor Fate. Fate arrives in the middle of a concentration camp to secretly feed the prisoners, and then shows the prisoners how to commit sabotage against the Germans without their knowledge by mixing sand with gunpowder in their artillery shells.
Reprints

The Junior Justice Society of America (Table of Contents: 10) (Expand) /

Genre
superhero
Characters
Dr. Mid-Nite [Dr. Charles McNider]; Hooty (an owl); Martha; Eric (brother of Gunther, Martha's wife, inventor); Harriet (Eric and Martha's daughter); Gunther (mention only); the Nazis (villains)
Synopsis
Dr. Mid-Nite and Hooty head for Norway, having the name of the underground leader in his possession. Upon arriving at his house, a young lady nervously tells him that the man isn't home, but the good doctor is not to be denied. After feeding the pair, the man shows Dr. Mid-Nite a special gun he has invented to fight submarines. Dr. Mid-Nite then aids he and his men in blowing up some German ammunition.
Reprints
Keywords
Narvik; Norway

Genre
superhero
Characters
The Spectre [Jim Corrigan]; the Nazis (villains)
Synopsis
The Ghostly Guardian soon arrives in Belgium near a hidden Nazi airplane hanger, noting the capture of some members of the underground. He quickly frees them, feeds them and marks a path for Allied bombers to come in and destroy the hangers.
Reprints
Keywords
Belgium; R.A.F.

The Statue of Buddha (Table of Contents: 17)

Genre
aviation
Characters
Hop Harrigan; Tank Tinker; Mitsui Mato (villain, spy); the Japanese (villains, some die)
Synopsis
Hop must deal with a Japanese spy, Mitsui Mato, who is trying to figure out where Allied attacks are coming from, and to eliminate them.
Reprints
Keywords
218th Squadron; Batavia; Curtiss Kittyhawk

Genre
humor; superhero
Characters
Johnny Thunder; The Thunderbolt [Archibald]; Gestapo agents (villains)
Synopsis
Johnny arrives in Czechoslovakia and immediately feeds members of the Czech underground. Unfortunately, a German soldier sees what is happening and Johnny asks the Thunderbolt to eliminate him. That done, Johnny secures the plans the Germans have drawn up and deals with their plan in a most unusual manner.
Reprints
Keywords
Czechoslovakia; Say You

Genre
superhero
Characters
The Sandman [Wesley Dodds]; Sandy [Sandy Hawkins]; Adolf Hitler (villain); unnamed Nazi Captain (villains); the Nazis (villains)
Synopsis
The Sandman and Sandy are sent to Greece, and the German commander dreams about them coming and disrupting their operation. The duo help destroy some Nazi equipment, then claim that they are turning Nazi as a ruse to further learn more of the Nazi agenda, then they crush it!
Reprints
Keywords
Greece

Sandman is assisted by his junior partner Sandy in All-Star for the 1st time (Sandy also appears in issues #15 & 19).

Genre
superhero
Characters
Justice Society of America [Hawkman [Carter Hall]; Dr. Fate [Kent Nelson]; The Sandman [Wesley Dodds]; Johnny Thunder; Starman [Ted Knight]; Wonder Woman [Diana Prince]; Dr. Mid-Nite [Dr. Charles McNider]; The Atom [Al Pratt]; Johnny Thunder]
Synopsis
One by one the different members show up to file their reports with Hawkman...all except Johnny, who was so busy that he didn't have time to eat himself. So he grabs a handful of the capsules and downs them all at once, with distressing results!
Reprints
Keywords
Golden Lasso