Napoleon and Samantha (Table of Contents) 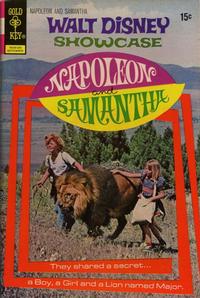 Napoleon and Samantha (Table of Contents: 1)

Adaptation of Disney movie, released on July 5, 1972; Comic book historian Mark Evanier said he believes this issue was written by Mary Carey, although he is not certain. This would make sense, as she wrote several Disney-based books for Western Publishing.
Writer credit confirmed by Martin O'Hearn.