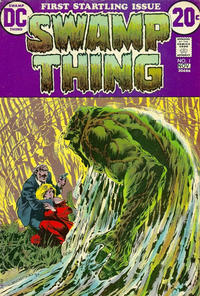 Job Number
J-1823
First Line of Dialogue or Text
Welcome to the world of Swamp Thing, a creature less than a man, but more than a monster.
Characters
Swamp Thing
Synopsis
Includes bios of Len Wein and Bernie Wrightson, with caricatures by Wrightson.
Reprints