Is Earth Their Laboratory? (Table of Contents) 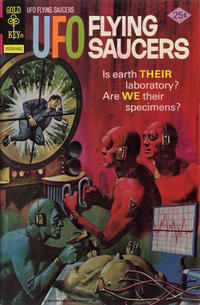 Genre
science fiction
Synopsis
More than once in history the hunter has become the hunted, and what if that "souvenir" for the aliens was you?
Keywords
alien abduction

Signed underneath the wrist of the character on the right of the page.

Do You Believe in Flying Saucers? (Table of Contents: 4)

Genre
science fiction
Characters
Hoaxmaster
Synopsis
What some flying saucers might be.

Same art as the other Hoaxmaster stories in this series, all by Bolle.

Fire in the Rain (Table of Contents: 5)

Jack Sparling is easy to spot by his cute baby faced girls, and big eyes, snub noses and round lips.

Get These Dynamite Embriodered Cloth Patches... (Table of Contents: 6) (Expand) /

Messages from the Past (Table of Contents: 8)

Genre
science fiction
Synopsis
Thousands of birds tumble from the sky in 1846.

Cute baby faced females is a sure sign of Sparling.

A Story That Could Be True (Table of Contents: 13)

Genre
science fiction
Synopsis
Not everyone has actually seen a UFO, but almost all of us have imagined what it would be like.
Keywords
first contact; flying saucer

The faces of the aliens are identical to aliens in Certa's signed story in #10. They even look like his villains in Durango Kid Comics.

The inklines in faces and the noses points to John Celardo.

The faces are similar to Celardo's drawings in other Gold Key magazines.

Genre
science fiction
Synopsis
The aftermath of a storm in Tasmania produced a memorable thing found on a beach.
Reprints

The inking and the staring eyes of people are by Dominguez.