Issue #1 of 4. Introduced at a bargain price: "First Issue! Only 99¢ $1.25 CAN" appears within a spatter of blood on the cover.
This issue has variants:
Keywords
breakout character; first issue; limited series

[Portrait of a Bastich] (Table of Contents)

Letters and logo design credits from Todd Klein via http://kleinletters.com/. 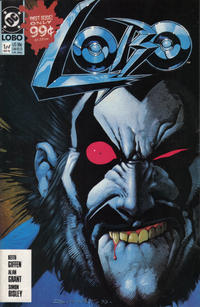 The Last Czarnian, Part One: Portrait of a Psychopath (Table of Contents: 1)

First Line of Dialogue or Text
Can ya believe it?
Genre
humor; science fiction; superhero
Characters
Lobo; Vril Dox; Lady Quark; Strata; Miss Tribb; space dolphins; chief warden of L.E.G.I.O.N. holding prison; 'Bo's Bros (angry mob devoted to Lobo); bookstore proprietor; members of the Legion of Decency Paramilitary S.W.A.T. Unit; various lowlife patrons of the "Scarf 'n' Barf" space-truckstop
Synopsis
Lobo is furious that someone has written an unauthorized bio of his life and decides that the author has to die. His quest for revenge is interrupted, however, by Dox who tasks him with bringing in a prisoner alive to L.E.G.I.O.N. headquarters. Unfortunately, the person Lobo wants to kill is now the same person he has sworn to protect--his fourth grade teacher Miss Tribb.
Reprints

The story contains three text pages which are presented as chapters of Lobo's unauthorized biography and tell portions of his origin.