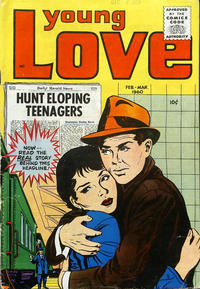 The Truth Has Many Faces (Table of Contents: 1)

Bottom 1/3 of last page is an advertisement.

Genre
romance
Characters
Ingre Sue Larsson; Peter "Pip" MacMillian; Reginald MacMillian; Clara MacMillian; Pat
Synopsis
Ingre comes to the USA to study for her PhD, and takes a job as a maid with the MacMillian family to pay for her expenses. Ingre and Pip MacMillian fall in love, but various things keep postponing their marriage. Ingre thinks Pip’s father is interfering because of his political ambitions. Ingre returns to Norway, but Pip and his father track her down. Mr. MacMillian apologizes and Ingre weds Pip.

Pencils: Late Powell work, grey scale 'photos' in the paper on the opening page look like Powell's then current work for Sick.

Genre
romance
Characters
Sarah Hadley; Brad; Mrs. Walker; George
Synopsis
After Sarah is jilted by her fiancé Brad, she is afraid to fall in love again. New town doctor George proposes to Sarah and she reluctantly overcomes her fear and accepts. However, on the day of her wedding, George hasn’t appeared and she decides to leave town to get away from the gossip. Sarah then gets a call: George was injured in an auto accident. He isn’t badly hurt and he and Sarah have their wedding later.

My Feature Story (Table of Contents: 5)

Genre
romance
Characters
Kip Malcolm; Louise; Carl Bergen; Mrs. Bergen
Synopsis
Louise is going steady with Kip, a longtime friend, even though he’s overweight (due to a glandular condition) and this makes her friends mock her. Louise finally breaks up with Kip when he embarrasses her by breaking an antique chair, and she starts dating Carl. However, Kip’s singing prowess at the school show makes him a hit with the other students. Louise is ashamed but knows “he’ll come back to me” and this time she won’t let peer pressure break them apart.

Pencils previously attributed to Bob Powell "in a more 'modern' style" by Ger Apeldoorn but changed to Morrow in 2018, comparing it to his signed work on Sick.

The Gentle Nudge (Table of Contents: 7)

Genre
romance
Characters
Don; Don's girlfriend
Synopsis
A young woman writes a letter to the local newspaper’s “Love Doctor,” complaining that her fiancé Don hasn’t proposed marriage although they’ve been dating for six years. The Love Doctor invites her to his office and says he’ll solve her problem: the columnist is Don, and he says he’ll marry her right away.