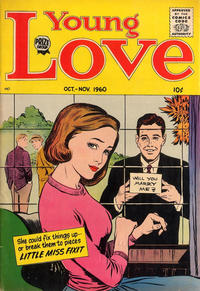 I Was the Other Woman (Table of Contents: 1)

Ben's last name is given as "Linders" at the top of page one, but in the second panel's caption he's referred to as Ben Latham.

Hit the Road, My Heart (Table of Contents: 2)

Genre
romance
Characters
Chick Adams; Vera Lang; Dave Camata; Grace Talbot
Synopsis
Vera and Chick are a song-and-dance team but Vera wonders if they’ll ever have time to get married. Chick announces that he’s dumping Vera to marry the wealthy Grace. Grace says “you’re always good for a laugh!” but she won’t marry him. Chick comes back to Vera with an engagement ring.

There is a small portrait-type panel of a woman at the introduction of the letters page.

Genre
romance
Characters
Jeff; Claire; Sheila; Peg
Synopsis
Claire dates Jeff but is unable to break into his group of school friends despite her best efforts. They finally say they were just testing her, but Claire tells them off: “I wouldn’t have any of you prejudiced snobs for friends if you were handed to me on a platter!” She will, however, keep Jeff as her boyfriend.

Genre
romance
Characters
Jimmy Durkin; Patsy; Dotty; Tom Carny
Synopsis
Patsy has a crush on Jimmy but is too shy to tell him. Her friend Dotty tries to fix them up but only makes things worse. Finally, she gets them together and apologizes for her errors. In return, Jimmy and Patsy decide to fix Dotty up with another boy, but Dotty admits to Patsy that she also had a crush on Jimmy but Dotty is a better match for him.

The bottom third of the last page of this story is filled with an advertisement.

Good for the Gander (Table of Contents: 7)

Genre
romance
Characters
Jim Brant; Olivia; Ted; Gloria Watson; Burt Danners
Synopsis
Jim gets angry when Olivia dates Ted, following the advice of newspaper columnist Gloria to make sure of her love by seeing other people. Jim and Olivia break up, and Jim goes out with many other girls. Olivia complains to Gloria and says “I’ll never take anyone’s advice again!” Olivia dates Burt and they’re in an auto accident. Olivia is rescued by Jim, now a state trooper. In the hospital, Gloria accidentally reveals that Olivia still loves Jim, and he says he loves her too.