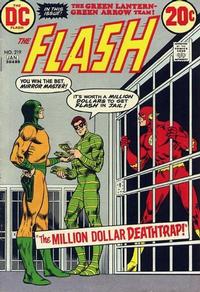 Mirror Master is referred to as Joe Scudder here, but from The Flash (DC, 1959 series) #239 (February 1976) on his first name is Sam and later in #255 (November 1977), the scripter of all these stories, Cary Bates, makes the villain's full name Samuel Joseph Scudder. The Top is also erroneously referred to as Roscoe Neyle here when his established name is Roscoe Dillon.

The Fate of an Archer (Table of Contents: 2)