On-sale date from Etcetera & The Comic Reader #88 August 1972.
This issue has variants:

The Monster of the Monoliths! (Table of Contents) 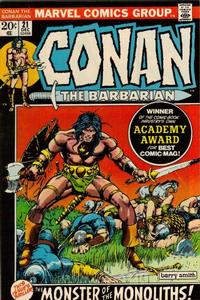 The Monster of the Monoliths! (Table of Contents: 1)

According to an interview with Craig Russell in Conan: The Jewels of Gwahlur, only the first page and a couple of separate panels were fully drawn by Barry Smith, Val Mayerik completed figure work and Russell backgrounds. Inker Dan Adkins fell behind and called on them to do finished inks. In Back Issue #67 Russell stated he along with Val Mayerik did the finished pencil work, with Russell, Mayerik and Mark Kersey completing the inking.