Actual indicia is Amazing Spider-Man King-Size.
The publication date is likely to be September 1973: the back-cover ad (for Junior Sales Club of America) can be found in 1973 only on the Marvels with September and October cover-dates, but the date can probably be narrowed to the first of those two by the half-page ad on the letters page in September's issue of Fantastic Four (Marvel, 1961 series), #138, which promotes both this King-Size and Fantastic Four Annual (Marvel, 1963 series) #10. On-sale date from The Comic Reader #97, May 1973.

The Goblin Lives! (Table of Contents)

Re-visioning of the cover to Spectacular Spider-Man, The (Marvel, 1968 series) #2. 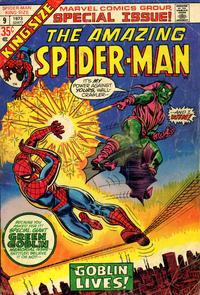 The Goblin Lives! (Table of Contents: 1)