The on-sale date is the publication date reported in the U. S. Copyright Office renewal filing. There is no listing for the original registration.

Genre
detective-mystery
Synopsis
Man climbing up a rope about to be cut. 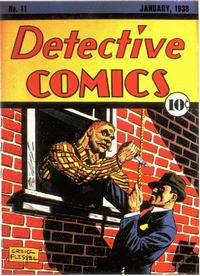 First Line of Dialogue or Text
The fleet's in!
Genre
crime; detective-mystery
Characters
a gang of anarchists (introduction, villain, death); Speed Saunders; Ensign Alsworth
Synopsis
The fleet is at anchor in New York Harbor. A plot is uncovered to destroy the reef at the harbor entrance, thus stranding the ships. Speed puts on a diving suit and gets dropped from a plane near to the reef. On the sea bottom he finds a submarine and enters through a hatch. He holds the saboteurs at gunpoint, but they overpower him, tie him to a post and escape. With the clock ticking down, the sub begins to surface. With only a minute to go, Speed escapes the sub just before it blows up. No damage has been done.

The Power Behind "Machine Gun" Kelly (Table of Contents: 4)

First Line of Dialogue or Text
Larry leaves James Wilkes at his home...
Genre
detective-mystery
Characters
Nick Orsatti (villain); Larry Steele; James Wilkes; Jones
Synopsis
Leaving James Wilkes safely at his home, Larry and the police set off to the royal Club to arrest Nick Orsatti, who escapes out of a back door. He drives to an apartment building which he owns, and descends into the cellar. Later, Larry goes back to the club, but is captured at gun point by one of Orsatti's henchmen, who drives him to his boss.

[The Phony Murder of Sir Fenton Carsley] (Table of Contents: 6)

First Line of Dialogue or Text
How about dinner at the club this evening...
Genre
crime; detective-mystery
Characters
Sir Fenton Carsley (introduction, villain); Cosmo; Inspector Burke; Phyllis Carlin
Synopsis
Cosmo is in England visiting his old friend Inspector Burke of Scotland Yard. A report of a body dragged from the River Thames comes in, and the pair arrive at the wharf to find a body whose face has been smashed in. His wallet contents reveal that he is Sir Fenton Carsley. Cosmo casts doubts on the identification. Calling on Sir Fenton's niece Phyllis that evening he discovers that on the following day, when she reaches the age of twenty-one, she will inherit all of the estate. Cosmo uncovers a plot by Sir Fenton to cover his bad debts by murdering his niece.

First Line of Dialogue or Text
I guess I'll drop in on old Kramer...
Genre
detective-mystery
Characters
Kramer (introduction); a gang of crooks (introduction, villain); Bruce Nelson
Synopsis
Bruce goes to the shop of old Kramer to see if his watch is fixed. The man behind the counter tells him Kramer has gone to Buffalo to his daughter's funeral. Bruce knows that Kramer has no daughter and has spotted the old man's glasses on the counter. He leaves, goes round to the back and breaks in. He finds a gang of men forcing Kramer to open his safe. By various devious tricks, including shooting a bottle of acid on an overhead shelf, he incapacitates them, just as the police arrive.

Incident in Algiers (Table of Contents: 8)

[The Atlantis Aftermath] (Table of Contents: 10)

First Line of Dialogue or Text
Gaily the Atlantis docks at France...
Genre
adventure; spy
Characters
an anarchist (introduction, villain, death); Bart Regan; Sally
Synopsis
Bart and Sally are met from the boat by the Paris representative of the U.S. Secret Service. Mentioning that they captured an anarchist on board ship and the man draws a gun, telling them he a colleague of the anarchist. Exiting the car they are approached by a gendarme who wants to sell them a lottery ticket. Both the man and Bart buy one, the latter with American currency. In a warehouse Bart and Sally hide behind some crates but the man advances on them with his gun. He is shot by the gendarme who has followed them. Bart explains to Sally that he paid the gendarme with a cigar coupon.

Genre
adventure; biography
Characters
Sir Hubert Wilkens
Synopsis
One incident in the life of Sir Hubert Wilkens, involving a crash landing over the Arctic, an attempt to walk 97 miles to the nearest land over frozen ice, and a fall into the ice where drowning was narrowly avoided by catching the edge of the ice with his ice pick.