The Monster from the Mound! (Table of Contents) 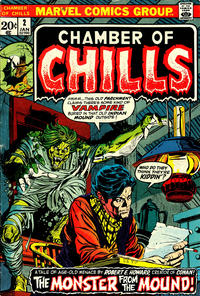 The Monster from the Mound! (Table of Contents: 1)

Adapting the story "The Horror From the Mound" by Robert E. Howard.

Irrelevant Info and Inane Items, Illustrated and Inscribed by an Infinite Number of Monkeys! (Table of Contents: 2)

Between pages 6 and 7 of the first story.

Job Number
1145-Z
Genre
horror-suspense; science fiction
Synopsis
A vampire awakens from a sleeping tube on a space ship and kills everyone aboard.
Reprints

Spell of the Dragon! (Table of Contents: 5)

Job Number
1190-Z
First Line of Dialogue or Text
A timeless adventure of Brak the Barbarian!
Genre
sword and sorcery
Characters
Brak; Jonel; Valena
Synopsis
The swordsman Brak is sent by a witch to kill a dragon, but she doesn't tell him that he will be compelled to kill the next person he sees after he performs the deed.
Reprints

Brak the Barbarian was created by John Jakes and previously appeared in a series of short stories and novels. This is the first appearance of the character in comic book form.