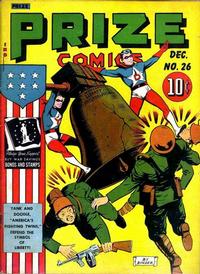 Case of the Crooked Clown! (Table of Contents: 1)

Genre
superhero
Characters
Yank and Doodle [Yank [Dick Walters]; Doodle [Rick Walters]]; Uncle Bob Walters; prison warden; Charley (U.S. Assay Office worker, introduction); Funnibone (villain, introduction); Rudolf Schmidt [aka Roger Smith] (villain, Gestapo agent)
Synopsis
Funnibone helps Roger Smith from being electrocuted in the chair and Smith agrees to aid the criminal in his pursuits of destroying democracy in America if Funnibone agrees to seek out and destroy the duo that put him in the chair to begin with: Yank and Doodle. Funnibone agrees, but pulls a double-cross on Smith, or so it seems.
Reprints

Script credit by Craig Delich, courtesy of the Who's Who, which lists Norris as the scripter through 1942 (no scripters listed after 1942).

The Commandos Are Coming (Table of Contents: 2)

First Line of Dialogue or Text
When the Iroquois tablets were stolen from the Indian museum, it launched the Green Lama...
Genre
superhero
Characters
Green Lama [Jethro Dumont]; Tsarong; Jean Parker (Dumont's assistant); Dr. Sommervell (Jean's Uncle, introduction); Sachem [Dr. Sommervell's spirit] (death); Mr. Dumm (banker); Cassidy (a Policeman); Slippery Sam (villain); The Red Gang (villains)
Synopsis
Jean calls Jethro and asks him to come over as the Green Lama to the Indian Museum to meet her uncle and curator of the museum. Dr. Sommervell feels that the museum's Iroquois Tablets are phony but can't figure out why, so The Lama enters the Realm of History to discover the truth. There, in 1204, a spitting image of Dr. Sommerville as a Sachem is falsely accused of stealing the tablets and he gives the real tablets back to his own time, and they are presented to Dr. Sommervell and Mr. Dumm, as well as having Slippery Sam and the Red Gang arrested for plotting to steal the tablets.
Reprints
Keywords
Greenwich Village

The last 1/3 of page 8 is an illustrated ad for Cowboy Movie Thrillers.

Dr. Ullrich has found Victor Frankenstein's original notes and creates a Bride for the monster

The General and the Corporal / comic story / 2 pages (report information)

Hands Across the Ocean (Table of Contents: 8)

First Line of Dialogue or Text
Why will an honest policeman commit perjury? What sinister forces can twist the tongues of men...
Characters
The Black Owl [Doug Danville]; The Laughing Head (first appearance, villain)