On-sale date from Etcetera & The Comic Reader #89 September 1972.
This issue has variants:

Where Demons Dwell! (Table of Contents) 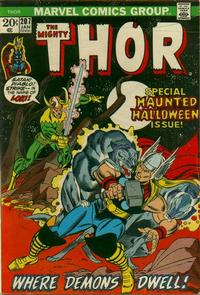 Job Number
1169Z
First Line of Dialogue or Text
Once, they called it, All Hallows’ Eve… the night of All Saints, All Souls.
Genre
superhero; fantasy-supernatural
Characters
Thor; Absorbing Man [Crusher Creel]; Loki; Sif; Hildegarde; Karnilla; Tom Fagan; Steve Englehart; Gerard Conway; Len Wein; Glynis Wein; Satan (dog); Diablo (dog)
Synopsis
While the comics creators take part in Tom Fagan’s Halloween costume parade, Thor battles firstly The Absorbing Man, and then Loki. Sif persuades Karnilla to assist Thor in his fight with Loki, in return for which she agrees to accompany Karnilla on a quest. Thor summons a storm and Loki is rendered blind. Stumbling, he falls over the edge of a cliff!
Reprints

Marie Severin is credited for 'good works' on the splash page. Marie drew caricatures of Gerry Conway, Steve Englehart, Tom Fagan and Len and Glynis Wein throughout the story.

This is part of an unofficial Marvel-DC "crossover" set in the real-world Rutland, Vermont based Halloween parade run by Tom Fagan. It was orchestrated by three freelance writers; Steve Englehart (who scripted the Beast story in Amazing Adventures #16); Len Wein (author of Justice League of America #103) and Gerry Conway on Thor.

Irrelevant Info and Inane Items, Illustrated and Inscribed by an Infinite Number of Monkeys! (Table of Contents: 2) (Expand) /