Indexed from a scan from http://digitalcomicmuseum.com.

Cover represents a scene from the story "Circus Sweetheart." 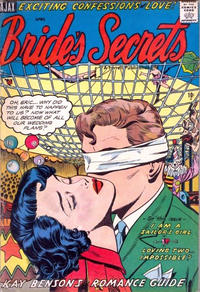 Genre
romance
Characters
Peg; Bob; Dick
Synopsis
Bob is jealous and possessive of his wife Peg. After he’s injured in an accident, Bob uses a wheelchair and demands constant attention, even though “the doctor said that chair isn’t necessary.” Peg believes Bob is faking and enlists her cousin Dick to pretend to be her lover. Bob leaps out of his wheelchair and confronts Dick, who punches him. Peg tells Bob “there’s no cure for your jealousy” but when she collapses from nervous exhaustion Bob nurses her and promises to change. They reconcile.

Genre
romance
Characters
Eric Knowles; Helen; Jack Mortimer
Synopsis
Circus animal trainer Helen loves trapeze artist Eric but sleazy ringmaster Jack says “You’re gonna be my girl, baby!” When Eric intervenes, Jack hits him in the eyes with a whip, then says he’ll blackball Eric in the circus world if he doesn’t perform. Eric falls and is nearly killed by a lion but Helen rescues him and Jack is arrested.
Keywords
Circus

There is some suggestion this story was altered due to the Comics Code: on page 3 and page 7, there are panels where a whip appears to have been removed from the artwork.

Genre
romance
Characters
Mary Masters; Bill Summers; Mr. Masters
Synopsis
Mary helps her father run a ferry; he refuses to let her date sailors, even decent Naval officers like Bill. When several crooks try to hijack the ferry, Bill and Mary team up to capture them and Mary’s father decides Bill is good enough to become his son-in-law.

The first letter is captioned, "I Haven't Told the Truth..."

Genre
romance
Characters
Ginny Smith; Bill Lawson; Susy Smith; Teddy; Joe Smith
Synopsis
Ginny’s husband Joe is killed in the war, leaving her a widow with a young child. Her former suitor Bill sends a note of condolences. Time passes and Ginny’s daughter Susy grows up. One day Susy invites her new boyfriend home to meet her mother, and Ginny is shocked: it’s Bill! Bill agrees to break up with Susy, who is upset. Ginny successfully promotes a romance between Susy and Teddy, a more age-appropriate suitor, and now Ginny can marry Bill.