First Line of Dialogue or Text
Did They Suspect That This Was My First Real Date?
Genre
romance 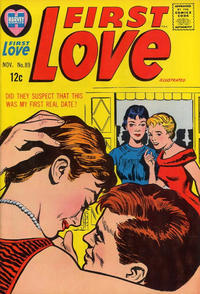 Genre
romance
Synopsis
How to know when a boy really loves you.
Reprints

The rest of the page is the first part of the story "Nobody's Sweetheart," which continues after one page of text features.

Genre
romance
Characters
Barbara Brill; Clark Thorne; Mrs. Brill; Jack Simmons; Betty
Synopsis
High school athlete Barbara is sensitive about her femininity and lack of dates. Clark offers her a full scholarship to State U. but she says she’s going to an all-girl college out of state. Clark says “boys like their girls dainty, feminine” and Barbara undergoes a makeover, hoping to attract fellow student Jack. Jack gets engaged to another girl. Barbara falls in love with Clark and decides to go to State U.
Reprints

Art credits from Matt Baker: The Art of Glamour and submitted by Jose Villarrubia via the GCD Error Tracker.

Probably (like the rest of this issue) a reprint, but original source is not known.

All That Love--And Nothing in the Bank! (Table of Contents: 9)

Genre
romance
Characters
Casey; Casey's father; Nick Harris; Cora Slate
Synopsis
When her father becomes an invalid, Casey has to take over his gas station and feels she’s lost her femininity. She exaggerates the mechanical problems with Nick’s auto to keep him in town. They fall in love.

Probably a reprint but original source is not known (most likely a Harvey romance comic not yet indexed).

Genre
romance
Characters
Ann; Ches Barker; Bob; Jim Fairway; Jane
Synopsis
Ann turns down the marriage proposal of Ches because he’s just a small-town grocery clerk and she wants financial security and luxuries. Ann moves to the city and gets a job; she dates many men but cannot find one who is both interesting and well-off. Returning home for her sister’s wedding, Ann meets Ches again and realises he is the man she should have chosen. Ches says he still loves her and they are reunited.
Reprints

Genre
romance
Characters
Diane Crawford; Pete Hardy; Frank; Jones; Sherry Roberts
Synopsis
Orphaned Diane has no social life in high school because she works in her aunt’s boarding house after school. She rescues former boxer Pete when he jumps off a train. With the aid of railroad worker Frank, Diane encourages Pete to resume his boxing career. Pete’s a success and Diane thinks she’s lost him, especially when his former fiancee Sherry reappears. Pete is defeated in the championship bout but tells Diane she’s the one he loves.
Reprints
Keywords
boxing

Genre
romance
Characters
Dick Wilkins; Betty
Synopsis
Betty has a crush on pilot Dick and takes flying lessons to be near him, but she’s not a good student. Dick has recurring attacks of malaria from his wartime service. He collapses and Betty has to fly him to a hospital to save his life. Dick thanks Betty and kisses her.
Reprints

Synopsis
Readers write in with their opinions on "dutch treat" dates (where boys and girls each pay equally).

The title and the masthead illustration are the same as in First Love Illustrated 14 (September 1951), but the "letters from readers" are different and this later version omits several smaller pieces of (Bob Powell) art, as well as the publisher's address and solicitation of additional reader comments on the topic.

This is certainly a reprint but the original issue is unknown.

Don't Be Dominating (Table of Contents: 17)

Synopsis
Advice to women: "a bossy, dominating gal usually ends up being a lonely gal!"
Reprints

Inside back cover, black-and-white.

Synopsis
Advice to young women about how to act on a date.
Reprints