"Dear John: I Love Someone Else-" (Table of Contents) 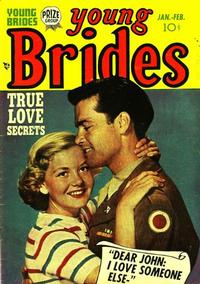 Genre
romance
Characters
Matt Sims; Cathy Gray
Synopsis
Soldier Matt loves his hometown girlfriend Ruth, but when he and WAC Cathy are stranded in a hut in Korea overnight, he kisses her and is conflicted. Matt later receives a “Dear John” letter from Ruth, breaking up with him. Matt wastes no time in finding Cathy, and they are soon married.
Keywords
Korean War; WAC

As You Were (Table of Contents: 2)

What Advice Would You Have Given? / comic story / 2.5 pages (report information)

First Line of Dialogue or Text
How good a romance counselor would you make?
Genre
romance
Characters
Nancy Hale; Frances D.; Michael
Synopsis
Frances and Michael are engaged, but her parents don’t think his antique store is a solid business venture. Michael gets a job as a mechanic then quits. He breaks up with Frances when her parents won’t give their consent to the marriage and she asks him to wait to open his store until they’ve been married for a year. Nancy Hale asks readers what advice they would give.
Keywords
advice column

This story does not have the "Nancy Hale's Problem Clinic" logo. That feature usually appeared in Young Love and Young Romance comics. Other issues of Young Brides had the "Ask Dan Wilson" series instead.

Nancy Hale's advice is printed upside-down in the final panel.

Bride and Broom! (Table of Contents: 4)

Genre
romance
Characters
Marge; Kay Ligget; William "Bill" Stuart; Ted Ligget
Synopsis
Marge marries young dentist Bill. Marge doesn’t like having to economize because Bill is building up a practice; she envies her married friend Kay, who has a nice house and luxuries. Marge finally leaves Bill after an argument over dresses she bought. Kay tells Marge that she and her husband were poor at first, but they worked together. Marge returns to Bill and apologizes, and he says they can budget for “a few luxuries if we’re careful!”

Genre
romance
Characters
Jeff Walden; Laura Walden; Mrs. Brice; Bill Capper; Dan Brice
Synopsis
Against her mother’s advice, Laura decides to spend her honeymoon with Jeff in the small town where she grew up. The townspeople are surprised when they learn Laura is Dan Brice’s daughter: her mother told her that her father was a prominent man, but Laura discovers Dan still lives there and is "the town tramp." Laura and Jeff stand up to the townspeople. A cleaned-up Dan spends time with them before they depart.

Crosshatching in the drawings suggests Simon input in the inks.