Index updated with information from Ger Apeldoorn via the GCD Error Tracker.

Too Beautiful to Be True (Table of Contents) 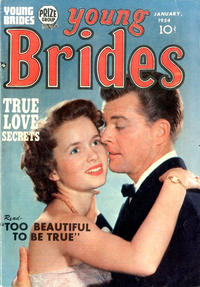 Too Beautiful to Be True! (Table of Contents: 1)

Genre
romance
Characters
Janet Price; Mr. Stevens; Amy Baker; Terry Wright; Phil; Walt
Synopsis
Beautiful Janet is repeatedly fired, either because her boss makes a pass at her or the wife of her boss is jealous. She also can’t get decent dates either because men get “fresh” or they think she’s out of their league. Janet undergoes a reverse-makeover to become her own “cousin,” mousy “Helen Brown.” She and her longtime crush Terry fall in love. Terry has his friend Walt give “Helen” a makeover and she becomes Janet again. Terry thinks he’s been the victim of a joke but Janet convinces him she’s serious and they decide to get married.

Original indexers notes: Kirby pencils credit per Ger Apeldoorn; Meskin per Harry Mendryk. Nick Caputo believes it is a combination of the two.

Genre
romance
Characters
Lil; Evelyn Giles; Marty Giles; Mr. Burton
Synopsis
Although her older sister Lil says Evelyn is too immature to marry, Evelyn and Marty wed anyway. Lil helps Evelyn and Marty afterward; Marty appreciates it, but Evelyn feels Lil is taking over. She also catches Lil and Marty kissing. Evelyn stands up to Lil, saying “what you really need is a life and a man of your own!” Marty and Evelyn can now live a normal married life.

Krigstein script per biblio info published in Robin Snyder's The Comics, Vol 27, No. 5, May 2016.

Fit to Be Queen (Table of Contents: 3)

Genre
romance
Characters
Dean Vincent; Nora Sidney; Mr. Sidney; Anne
Synopsis
17-year-old Nora’s father has her marriage to Dean annulled; he says Nora can marry Dean in a year if she still wants to, and Dean can come to work for him. Dean progresses in the business, but his relationship with Nora cools. When Nora turns 18, Dean dumps her, saying “I’ve…outgrown you!” Nora’s father says Dean’s success in business was rigged, and he needs Nora. Dean agrees and he and Nora depart to get married, but not before Nora’s father tells her that Dean had to be taken “down a peg,” and prove he was man enough to deserve Nora.

Good Manners Will Make You Rate With Your Date (Table of Contents: 5)

No Raving Beauty (Table of Contents: 6)

The Bachelor and the Baby Sitter (Table of Contents: 7)

Genre
romance
Characters
Julie Miller; Cass Loman; Peggy Sloan; Freddy; Mr. Sloan; Mr. Kendall; Mrs. Kendall
Synopsis
Cass gets teenager Peggy to babysit for his fiancée Julie’s little brother so they can have dinner with his boss. Peggy develops a crush on Cass and this affects his relationship with Julie; Peggy’s father warns Cass to stay away from his daughter. To make Peggy see reason, Cass says he’ll marry her right away, even though that means she might have to get a job “at least until the children come!” This scares Peggy off; she returns to her teenage boyfriend. Now Cass and Julie can marry in peace.