Information for issue from Ger Apeldoorn via the GCD Error List.
No month/year on the cover; indicia has '1950'.
On sale date as listed in the Catalog of Copyright Entries, Periodicals, January-June 1950, page 36, registration number B251536.

The Lady of the Lawless Range (Table of Contents) 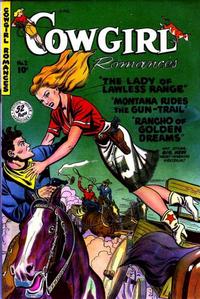 Synopsis
Contents of the comic

First Line of Dialogue or Text
At the home of The River Rose, the shy, young girl dismounted...
Genre
romance; western-frontier
Characters
River Rose; Jim Carter; Sarah; Quirt Hammond; Lawyer Lawson
Synopsis
River Rose thwarts the efforts of the evil Quirt Hammond and his accomplice, the prosecutor Lawyer Lawson, to frame a young stagecoach driver named Jim Barton for the theft of a fortune in gold from his company and restore him to the arms of his loving fiancee Sarah.

Information for this sequence from Anthony Durrant, 5/11/2007.

The Lady of Lawless Range (Table of Contents: 4)

Last page says Calamity Jane is in every issue.