The face in the foreground points to Albert as most probable artist. 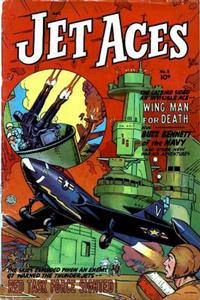 Wing-Man for Death (Table of Contents: 1)

The Lorelei Squadron (Table of Contents: 2)

Round "baby faces" with large eyes must be Sparling.

The Coward (Table of Contents: 4)

Chuck Miller is credited on war stories for Fiction House by Jerry Bails' Who's Who, and some rugged faces point to him when comparing with art sample in Who's Who and some Marvel features.