They Are the Unliving! (Table of Contents) 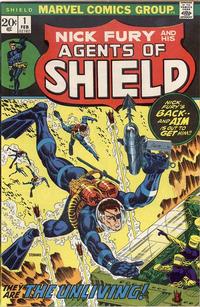 When the Unliving Strike! (Table of Contents: 1)

Genre
spy
Characters
Nick Fury; Jasper Sitwell; Dum Dum Dugan; Count Bornag Royale (Ambassador for A.I.M. / Advanced Idea Mechanics); "THEM"
Synopsis
Aboard the Heli-Carrier Count Royale, a representative of A.I.M. (Advanced Idea Mechanics) a society of the world's greatest intellects, is offended by SHIELD's security measures. Fury uses a sonic vibrator to blast into an underwater base but is trapped between electric energy waves. A stalemate occurs when Fury reveals he has fission bombs that would blow up the base. A group of androids escape and trample AIM's hordes. Royale tells SHIELD's directors he cannot offer AIM's services and technology under their current leader. Defeating the androids Fury suspects A.I.M behind the operation.
Reprints

Part 2 of 5. Story continues from TALES OF SUSPENSE #78 (June 1966), and presumably the flashback in STRANGE TALES #160-161 (Sept-Oct 1967) which was "too secret" for anyone to talk about. The android-growing tanks appear to pay tribute to THE THING FROM ANOTHER WORLD (1951). 1st published appearance of Count Royale; based on the dialogue the story takes place after his appearance in this month's TALES OF SUSPENSE #79 (July 1966) since his motivations in this story are questionable (his guilt is confirmed in the Captain America episode). Stark's problems with the Senate in TALES OF SUSPENSE #72-84 (December 1965-December 1966) are mentioned; his plant is forcibly shut down in SUSPENSE #78 (June 1966) presumably allowing A.I.M. to offer their technology to SHIELD.

The Enemy Within! (Table of Contents: 2)

Genre
spy
Characters
Nick Fury; Jasper Sitwell; Dum Dum Dugan; Count Bornag Royale (A.I.M.); A.I.M. (division of "THEM"); "Clipper Charlie" (barber); Slim; manicure girl
Synopsis
Returning from their latest mission, Fury catches hell from the military brass. Count Royale continues bad-mouthing Fury to SHIELD's board of directors. A general explains to Fury how A.I.M. has technology they desperately need, but refuse to do business as long as Fury's in charge. This confirms Fury's earlier suspicions that A.I.M. is not legit. Royale has returned to an A.I.M. observation post and watches as a squad invades the SHIELD barber shop. Fury, Dum Dum & Jasper save the day. Royale, meanwhile, feels Fury's rash actions have put the last nail in his coffin.
Reprints

Story is edited, cutting out splash page to form one continuous story.

The Enemy Within! (Table of Contents: 3)